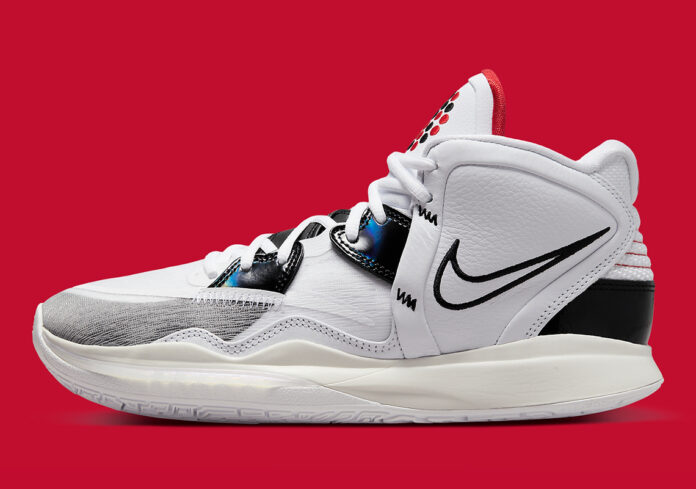 Introduced amidst controversy, the Nike Kyrie 8 — a silhouette Kyrie Irving had nothing to do with, according to the athlete himself — has made more and more appearances ever since the start of the year. And with February now behind us, the silhouette is forgoing its Valentine’s Day set-up for a colorway ostensibly dubbed “Man Machine.”

Gone, for the most part, are the shoe’s floral qualities, as the palette leans heavily on neutral shades. White, for instance, dresses both the tumbled leather along the side as well as the mesh that builds out the toe. Below, an off-white is used for the sole, a soft departure relative to the heather grey that accents the forefoot and the glossy blacks that overlay the lace unit and heel. What’s more, pops of red are present across the tongue, whose front-facing side alternates between Irving’s signature and an array of black and red dots.

For a closer look at this upcoming make-up, check out the official images below. These are likely to hit Nike.com and select retailers within the next few months.

In other news, the NOCTA Nike Hot Step releases this Thursday.