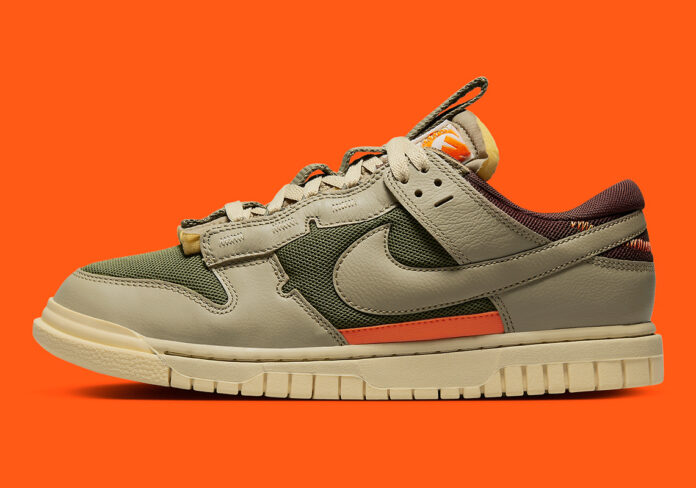 Since its inception almost 40 years ago, the Nike Dunk has maintained its relevancy through a bountiful amount of collaborators and disparate color blocking. From suede to leather to nubuck, the construction of the silhouette has stayed tried-and-true, that is until The Swoosh unveiled their recently retooled Dunk Low Remastered.

Recently seen in a dominant “Olive” treatment, the latter’s fall-friendly ensemble has been revealed in official imagery. Deriving a majority of its real estate from the army green shade, a darkened hue lays claim to the mesh vamp and midfoot panels whereas its tumbled leather overlays proffer a slightly lighter embellishment. Color-matched along its laces, reconfigured tongue construction and midfoot Swooshes, exposed foam at both the tip and base of the lacing system extends the “under construction” aesthetic. Elsewhere, titular orange accents come littered throughout the upper at its folded and stitched tongue tab and sliver of an overlay directly underneath the “Light Olive” tinted Swoosh. Underfoot, the downward lightening scheme employs across the cream-coated sole unit while a dark chocolate brown mesh finishes the design elements at its heel collar and sock liner.

While we sit tight on further release details for the pair expected to retail for $120, enjoy official images of the Nike Dunk Low Remastered “Olive” below in the meantime.

In other news, take an up-close look at the upcoming Jordan Westbrook Why Not .6.