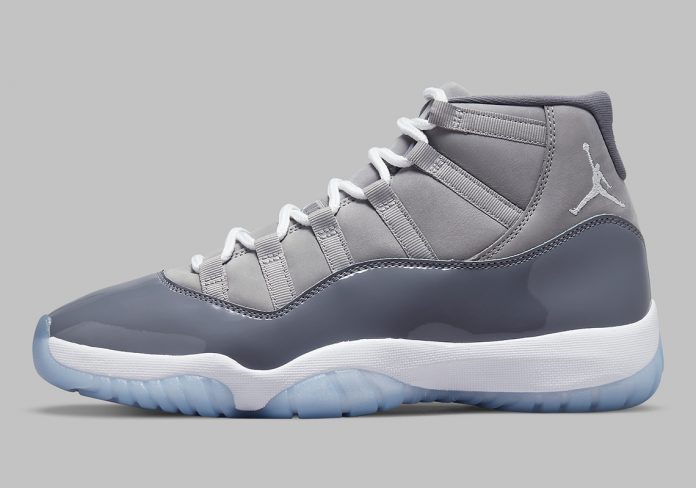 Rumored a handful of times since last releasing in 2010, the Air Jordan 11 “Cool Grey” returns on December 11th. Ahead of its third retro ever, the pair has emerged via official images.

First seen in 2001, the monochromatic take on one of the most popular Jordans delivers a remastered version of the model’s non-original colorway. A neutral grey nubuck makes up most of the upper, with glossy patent leather entering the mix by way of the iconic curved mudguard. Close inspection of the pair reveals a difference in height and shape in comparison to 2010’s “Cool Grey” 11s, though 2021’s iteration is a closer replica of Tinker Hatfield’s 26-year-old design. Laces and branding on the tongue, lateral heel and spine deviate from the greyscale arrangement in favor of stark “White” contrast. Yet, the semi-translucent icy blue outsole arguably steals the spotlight, addressing the yellowing that plagued the sneakers last time they released.

Enjoy official images of the Jordan 11 in adult and kid’s sizes here below, and anticipate a Nike SNKRS launch on Saturday, December 11th.

Elsewhere under the NIKE, Inc. umbrella, the Nike Air Max 1 celebrates its 35th anniversary throughout 2022.