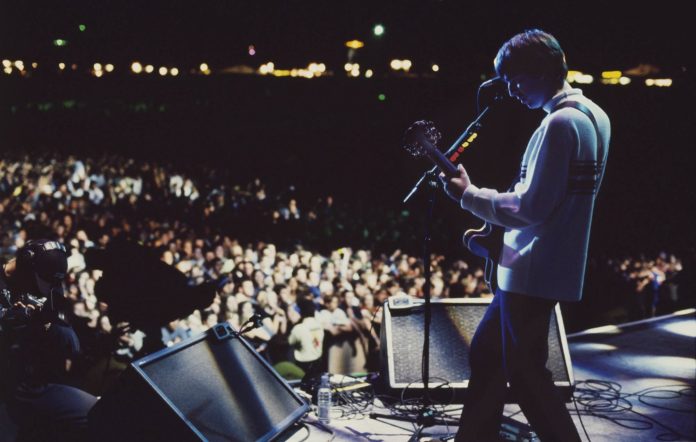 The footage is taken from ‘Oasis Knebworth 1996’ which is released this Friday (November 19). Released to mark the 25th anniversary of the band’s two legendary August 1996 shows, the film features never-before-seen archive concert and backstage footage from the gigs, with additional interviews with the band and concert organisers.

It became the highest-grossing documentary of 2021 when it was released in cinemas in September, and this home release includes full recordings of both 20-song concerts.

The band have previously released footage of ‘Some Might Say’ and ‘Champagne Supernova’. Check out Oasis performing ‘Wonderwall’ below:

An audio version of the performance has also appeared on streaming services. It will form part of a live album, also called ‘Oasis Knebworth 1996’, which is released digitally, on CD and triple LP on November 19 via Big Brother Recordings. You can pre-order here.

‘Oasis Knebworth 1996’ is produced by Black Dog Films, with both Noel and Liam Gallagher serving as executive producers.

“Knebworth for me was the Woodstock of the 90’s,” Liam said in a statement. “It was all about the music and the people. I can’t remember much about it, but I’ll never forget it. It was Biblical.”

Last month, Liam Gallagher announced he would be playing the biggest solo show of his career at Knebworth Park on June 4, 2022, with support from Kasabian, Michael Kiwanuka, Fat White Family and Goat Girl.

He was then forced to announce a second solo Knebworth Park show due to “phenomenal demand”. After both shows sold out, Gallagher took to social media to thank his fans.

He said: “My 2 Knebworth gigs, Friday and Saturday are now sold out. Absolutely blown away by the love and support. We believe in One Another see you there, C’MON YOU KNOW LG x”