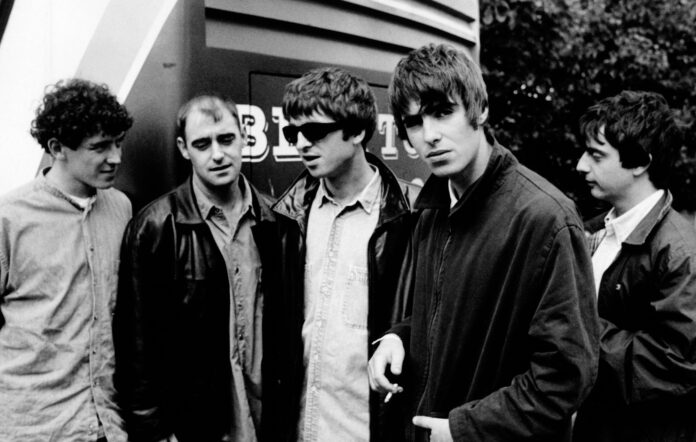 Rock photographer Michael Spencer Jones is attempting to track down the white Rolls-Royce that famously graced the cover of Oasis‘ third album, ‘Be Here Now’.

Back in 1997, Spencer Jones loaned the 1972 Silver Shadow from Leicestershire-based Flying Spares for the album shoot. It was sold the following year at a music memorabilia auction for £1,200, but experts have no idea where the car went from there. Jones has shared previously unseen pictures from the photoshoot at Stocks House in Hertfordshire, but to no avail.

Although the license plate on the album artwork reads SYO 724F – the same featured on a police van used by The Beatles on the cover of their seminal 1969 album ‘Abbey Road’ – the actual vehicle registration is MDH 119K.

‘Be Here Now’ features on @JoWhiley‘s Vinyl Revival this week on @BBCRadio2. Make sure to send over your memories of the album and what your favourite tracks mean to you. pic.twitter.com/CktIEoZejQ

Neil Arman, Director of Flying Spares, said: “Suppling the Rolls-Royce for the Oasis album cover is part of Flying Spares folklore. When it came back it was missing the famous Spirit of Ecstasy mascot, which someone had presumably pinched as a souvenir.

“The car wasn’t roadworthy even when we had it. It hadn’t been taxed since 1993 and had already been stripped for parts, including the engine. We fitted a new front grille and had it resprayed specifically for the shoot. The DVLA have no record of it being scrapped though, so it could well still be out there.”

He continued: “Even classic Rolls-Royces and Bentleys can lie forgotten under dusty sheets in garages – we call them barn finds – and this one has the kudos of being a piece of Britpop history. We’d love to help Michael Spencer Jones to locate it, or at least find out what happened to it.”

If you have any information regarding the whereabouts of MDH 119K please contact Flying Spares.

Speaking in a documentary to celebrate the 25th anniversary of ‘(What’s The Story) Morning Glory?’ in 2020, Noel Gallagher reflected on the harsh contemporary evaluations of the record: “I mean it goes to prove that really, journalists, they know fuck all. They had to second guess everything after ‘Morning Glory’, cos they’d got it so wrong.

“That’s why when ‘Be Here Now came’ out, which isn’t a great album, it got 10/10 everywhere, it didn’t get one bad review, because they didn’t want to be made to look like dicks again, and they were, because it’s not half the record ‘Morning Glory’ is.

“After that, they properly hated us after that, cos they didn’t understand us.”

In contrast, Liam Gallagher said in 2017 that ‘Be Here Now’ remains among his favourite records from the group, rating it 10/10 in an NME interview.

The post Oasis photographer on a mission to recover iconic ‘Be Here Now’ Rolls-Royce appeared first on NME.