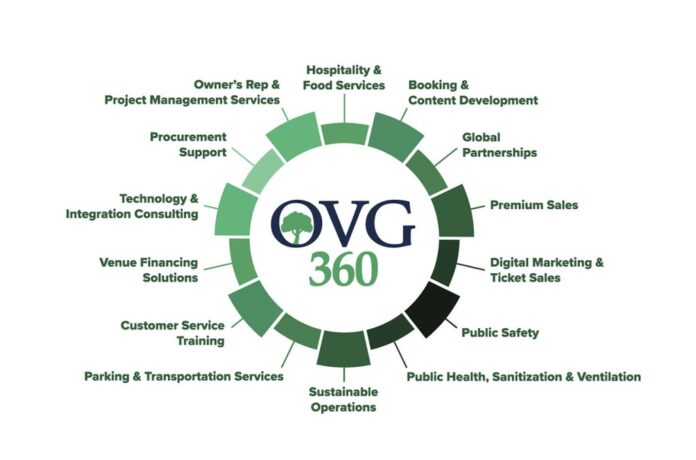 Months after finalizing the purchase of Spectra, Tim Leiweke‘s Oak View Group has rebranded its OVG Facilities division as OVG360 and announced plans to launch a new suite of services for its venue management and hospitality clients.

The news comes after six years of rapid growth across Oak View Group in partnership with music executive Irving Azoff and private equity firm Silver Lake, going from six employees in 2015 to more than 25,000 employees and more than $5.3 billion in deployed capital across nine projects, including the recently opened Savannah Enmarket Arena in Georgia. Last year, Oak View Group opened the $1.2 billion, 18,100-seat Climate Pledge Arena in Seattle as well as UBS Arena, a $1.1 billion multi-purpose, state-of-the-art arena located on the grounds of Belmont Park in Elmont, New York that serves as home to the NY Islanders hockey team. Starting in 2022, OVG is on track to spend $1 billion annually on building new arenas and redeveloping existing facilities, host more than 1,000 events per year across OVG venues for nearly 10 million guests and generate nearly $1 billion in ticket sales and $200 million in food and beverage sales across OVG venues.

“This isn’t about having the most accounts,” Leiweke tells Billboard. “This is about walking in the shoes of each of our clients, because we have been there. We have done that and we are them. We have a unique relationship and understanding of the challenges that they face and what they’re looking to solve, because we are the same.”

Leading the services initiative will be Chris Granger, who will serve as president of OVG360 and build out what Leiweke says will be 16 service companies for OVG’s clients in arenas, stadiums, convention centers and performing arts centers.

“Each one of these service companies is a resource and an expertise that we can give to our accounts that will help them find a better level of customer service and financial accountability,” Leiweke tells Billboard.

“The purchase of Spectra at its core was meant to round out our OVG offerings,” Granger tells Billboard. “Our vision here is to be a full-service venue management and hospitality company that can enrich the value created for our clients and our communities.”  Adding Spectra and its food services division, which manages more than 200 accounts, “allows us to go to venues and offer them services in every aspect of what a venue does,” Granger explains. “The idea is to meet the venues where they are and offer best-in-class services that can help them no matter what their needs are.”

OVG360 will also assist venues and client-partners working to address challenges around climate change with its new program GOAL (Green Operations and Advanced Leadership) and provide them with a roadmap to improve sustainability initiatives for their operations. The new global certification program, expected to launch shortly, will focus on environmental sustainability, health and wellness and equity and social justice in venues and the local communities they support.

Oak View Group has six projects currently in development, including the $280 million, 320-acre complex Bell Bank Park in Mesa, Arizona; Co-op Live, a 23,500-seat arena located in Manchester, U.K. which, when completed in 2023, will be the largest arena in the UK; the 20,000-seat Arena São Paulo in partnership with Live Nation Entertainment and GL events; renovations for the $150 million Royal Farms Arena in Baltimore, which OVG is leading in partnership with Baltimore Development Corporation (BDC) and Thirty Five Ventures, co-founded by NBA All-Star Kevin Durant; FirstOntario Centre Arena in Canada; and a new arena located at the Atlantic Wharf in Cardiff, Wales, in partnership with Live Nation Entertainment.

Prior to working at OVG, Granger worked for the NBA, the Sacramento Kings and at his most recent job with Ilitch Holdings, where he was responsible for all aspects of business operations for MLB’s Detroit Tigers, the NHL’s Detroit Red Wings and the company’s joint venture interest in concert promoter 313 Presents. He recalls inquiring about OVG when a competitor was trying to recruit him for an executive position.

“And the comment was, ‘OVG is not even on our radar. We don’t come across them at all,’ which I thought was a bit bold and is something I carry with me,” Granger said, laughing.