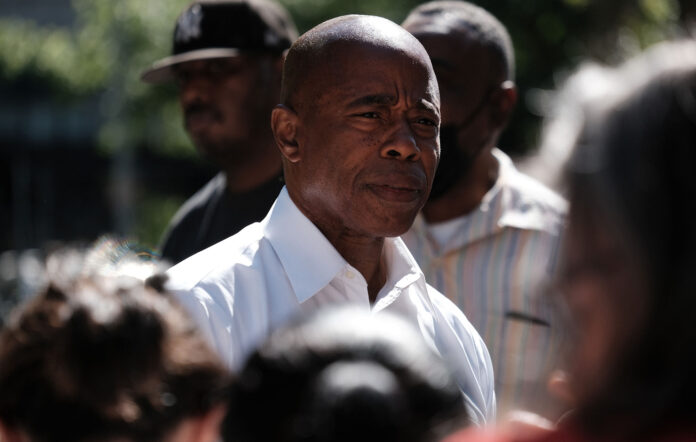 Earlier this month, Adams said during a press conference that after seeing “alarming” drill music videos, he felt they should no longer be shared on social media.

“We pulled Trump off Twitter because of what he was spewing,” the former NYPD officer said at the time. “Yet we are allowing music, displaying of guns, violence, we’re allowing it to stay on these sites.”

Adams added: “We are going to pull together the social media companies, and state that you have a civic and corporate responsibility.”

The Mayor also said he was “alarmed by the use of social media” by drill rappers before blaming the music for “contributing to the violence we are seeing all over this country.”

According to NBC New York, shootings year to date are reportedly up 37 per cent in the city versus this same period in 2021 – an average of nearly four people shot every day.

However, drill artists and rap culture experts have spoken to NME about how they don’t agree with Adams – and believe there’s an agenda behind his call to ban the genre.

“Drill music is our form of art,” Jeffrey Mark Alexander, who performs as 22Gz told NME. The Guyanese-American rapper is credited as a pioneer of Brooklyn’s drill scene.

When asked about the mayor’s recent comments condemning drill rap, he told NME: “It’s our expression of feelings and it shouldn’t be stifled.”

22Gz, who grew up in New York’s Flatbush neighbourhood, also shared that he has been trying to use his music to uplift the city.

“I’ve personally held several shows that went on without incident and have removed a lot of weapons from my visuals,” he said. “I’ve even tried to do positive work in my community like hosting a turkey drive in the fall and even that was shut down.”

He added: “All I’m trying to do is bring light to my community and I’m stopped every time so you tell me who’s being violent.”

​”Anytime somebody tries to spotlight music as what’s wrong with society that’s nothing more than gaslighting and trying to deter from dealing with the real problem,” he said.

Allen also told us he felt Adams should use his platform to get to the root of problem in the city’s communities, instead of focusing on the music.

“That culture existed before the music was created,” he said. “If you want music to have an aura of positivity and self-respect then you have to change the culture from which it derives from. If drill rappers are rapping about gang violence and specific shootings and specific people it’s because that’s what’s around them.”

He added: “People in government should understand that to solve this issue they should do something with the community to stop gang violence and deter murders. They should take the time to understand why it happens.”

The Brooklyn writer also suggested that if the mayor would focus his attention on solving community issues that drive gang violence, “there wouldn’t be a concern about drill music because the lyricism wouldn’t reflect that.”

Rap writer Anthony Malone shared a similar sentiment with NME. “Drill is an expression of the streets,” he told us. “A lot of these acts never had a voice nor someone that represents them. Eric Adams is further pushing the NYPD stigma against drill music.”

Malone went on to compare it with other genres whose lyrics aren’t seen to directly depict life, adding: “It’s an expressive art form that needs to be respected. Johnny Cash never shot a man in Reno and he’s revered, right?”

According to XXL, multiple recent murders have been connected to the city’s drill scene. Bronx drill rapper C-Hii Wvttz and Brooklyn drill artist Tdott Woo were both shot and killed in February. In January, Nas Blixky was shot in the head and leg but survived his shooting incident. Another rapper, Kay Flock, is in jail after being charged for murder after a fatal shooting in Harlem in December 2021.

However, Malone, who has spoken on the record to multiple rappers about the issue, feels that the music has given artists a way to escape a dangerous lifestyle.

“Artists like Sheff G and Sleepy Hollow are known to give back to their community due to their music success, even running an ice cream truck for kids one summer,” he said. “Before his passing, Pop Smoke used the drill platform to jumpstart a global music career.”

Malone also referenced a conversation he had last year with Brooklyn drill artists 26A for DJBooth. When asked if he felt drill music was providing the streets with a form of expression, 26A responded, “Yeah, in a way, because it’s giving a chance for them to get that pain out there that they’ve been experiencing. It’s giving them a voice they’ve never had.”

Last Tuesday (February 15) a group of New York rappers including Fivio Foreign, Maino, B-Lovee, Slow Bucks, and Bleezy met with Adams to discuss public safety in the city and the gun violence that is impacting the hip-hop community.

In a video from the meeting that was shared on Instagram, the rapper Maino said: “There’s been a lot of talk about drill rap, drill music in New York City, connecting violence with the culture, and I just wanted to create a conversation with the mayor.”

The clip then sees Adams add: “We’re going to roll out something together on the whole conversation, and we’re looking forward to it.”

Malone hopes artists and insiders can shift the perception of drill music so it can continue to thrive in the city.

“Drill, especially in the Bronx and Brooklyn is evolving into something outside of the gang ties,” he told us. “It’s entering the mainstream with keynote artists and producers jumping into the fold. It’s like trap music, but it’s our version in NYC.”