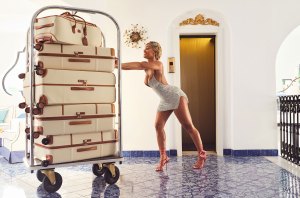 Continuing the trade magazine’s more subtle image (the calendar was once known for its racy imagery prior to the 2010s), this year’s stars went for glamour, each in their own unique way. Normani posed from the comfort of white bedsheets, Saweetie pushed stacked designer luggage on a bellhop’s cart at the La Scalinatella Hotel, and Grimes stayed true to herself with a technology theme. Iggy Pop, meanwhile, posed in silver body paint, and St. Vincent kept things simple with a close-up shot of her face, her tongue out and holding a Pirelli guitar pick.

Speaking about the inspiration for this year’s theme, Adams told Pirelli, “It wasn’t too difficult, if I’m honest, because on the road is what I’ve been doing for the last 45 years. When I proposed it, I almost thought maybe this had been done before because it’s such an obvious thing, and I thought the symbiotic relationship would be good, the idea of musicians who travel and a company that makes tyres. It makes sense to me. I thought they might have thought it was a bit too much on the nose, but in the end they loved it.”

See photos from the Pirelli calendar below.