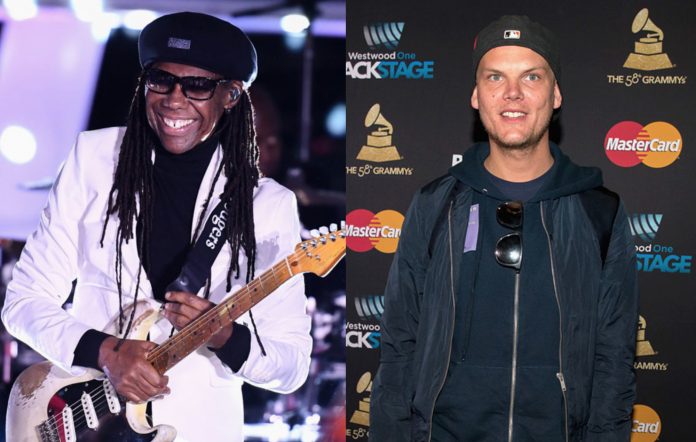 Nile Rodgers has said in a new interview that he wants to release several unheard collaborations that he did with Avicii.

READ MORE: Nile Rodgers on a long and illustrious career: “Most of my records are failures!”

The Chic star – who first worked with the late EDM producer on the track ‘Lay Me Down’, taken from the latter’s 2013 album ‘True’ – stopped by Swedish TV show Skavlan last week to discuss his impressive career, which stretches back to the early ’70s.

During the chat, he revealed a desire to put out some of the tracks he and Avicii worked on, provided he got the blessing of the Swedish producer’s family and estate.

“I love Tim. We wrote a lot,” Rodgers said. “I used to say – and I’ve said this many times – that if you put Tim and I in a room together for one week, we could write the entire Top 10. I mean, that’s how talented he was. He was a natural melody writer. Even though he didn’t read music, he didn’t understand it technically, but for some reason, spiritually and artistically, he had a gift.”

“We adored each other,” Rodgers said, before sharing why he thinks the music he and Avicii worked on has yet to be released.

“We did so much work, and I think probably the reason why the family has not put that work out – which I totally respect – is because Tim was the artist,” he explained. “And I think sometimes it’s not really fair for people to put out music that’s not sanctioned by the artist, that’s not completed by the artist, that doesn’t say: ‘OK, this is a finished piece of work.’ Because if it’s in the middle of the process, or you bring someone else in to finish it, that may be a new person’s understanding, and it feels like it’s just, maybe, taking advantage of the fact that Avicii was such a big name.”

Rodgers added: “If the family asked me, I would say OK, I was a part of this process, and all I would do is mix the record where we had it. Because I know what Tim was thinking and I know where we were. But I wouldn’t take stuff that I hadn’t been a part of and work in it.”

Avicii (real name Tim Bergling) died in 2018 after taking his own life.

Meanwhile, the estate of Avicii have announced that a new documentary focusing on the life and music of the late Swedish producer will be released in 2023.