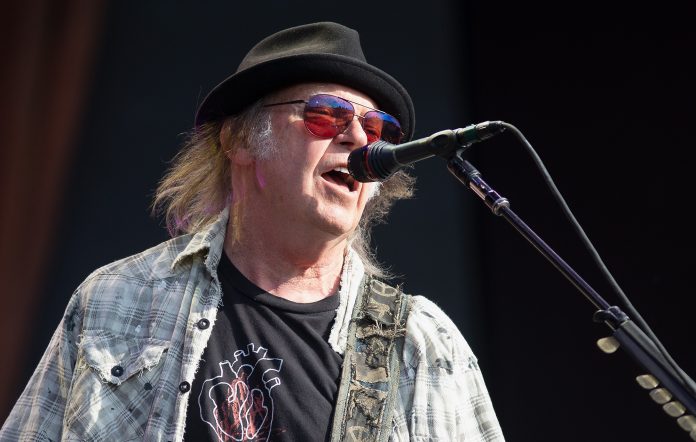 Set to arrive on December 10, the follow-up to 2019’s ‘Colorado’ comes after Young teased its arrival back in June, saying that “the Horse is back in the barn, shaking off the rust”.

“We are so happy to be back in the barn, a barn built to replicate the 1850s barn that had collapsed in exactly the same place, high in the mountains of Colorado,” Young said. He added that the personnel who have worked on the record include: Larry Cragg, Jeff Pinn, Bob Rice and Paul Davies.

In addition to the album news, Young & Crazy Horse unveiled a new track, ‘Song Of The Seasons’, available to stream for subscribers of his Neil Young Archives site.

The official Neil Young Archives Twitter account shared the news on Twitter, writing: “Hey now there’s a special treat for all you NYA members up on the Archives now … enjoy.”

hey now
there’s a special treat for all you NYA members up on the Archives now … enjoy pic.twitter.com/0yQ1TeZfzO

‘Barn’ will be released on December 10 via Reprise. You can see the album’s tracklisting below.

The last couple of years have seen Young share a number of unreleased projects from his extensive vault, including 1975’s ‘Homegrown’ and a number of live recordings like 1990’s ‘Way Down In The Rust Bucket’.

Meanwhile, Young has criticised hosting live shows during the pandemic, and called on big promoters to cancel their planned concerts.

In a recent blog post on his official website, Young labelled COVID-era gigs as “super-spreader events” and said “the big promoters are responsible” for any rise in cases that come from live shows.

“The big promoters, if they had the awareness, could stop these shows,” Young wrote in the blog post. “Live Nation, AEG, and the other big promoters could shut this down if they could just forget about making money for a while…

“They control much of the entertainment business. They hold the power to stop shows where thousands congregate and spread. It’s money that keeps it going. Money that motivates the spreading. The big promoters are responsible for super spreaders.”