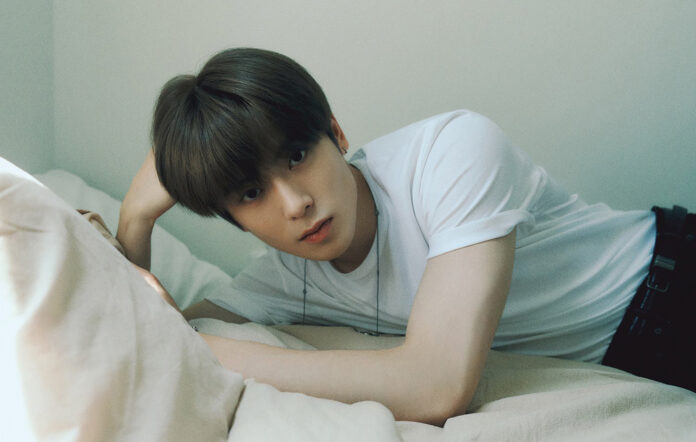 NCT’s Jaehyun has dropped a dreamy music video for his first official solo song ‘Forever Only’, which features lyrics he wrote.

READ MORE: NCT Dream on ‘Beatbox’: “We have this music that’s uniquely our own”

The guitar-driven mid-tempo R&B song was released today (August 18). In its sepia-hued music video, Jaehyun contemplates both loneliness and emptiness as he plays the guitar and unwinds at the beach alone. At night, he goes on a motorbike ride and ends up going for a dip in the ocean.

“The empty space you left behind / Fills mе with deeper longing for you / Bit belated this irony / Hеart is lost and lonely, lonely / Leaving a pain that spreads / The goodbye and a final kiss / Now I see you walking away / Be my forever only, only,” Jaehyun croons on the chorus.

The NCT 127 member previously co-wrote NCT 127’s ‘Fire Truck’ and NCT U’s ‘Dancing in the Rain’, but ‘Forever Only’ – which is part of the ‘NCT Lab’ project – is his first song where he has full writing credits on the lyrics.

SM ‘STATION : #NCTLAB’ #JAEHYUN’s first solo single ‘Forever Only’ is out on August 18! He participated in writing the lyrics of song!https://t.co/8aLx0Teklz#재현#ForeverOnly #NCT #NCT127 pic.twitter.com/MMDmscuPQo

Before ‘Forever Only’, the singer-actor had co-produced and written the unofficial, non-album song ‘Lost (I Want You to Say)’, which he has performed live at past NCT 127 concerts.

‘NCT Lab’, which started in February, is an ‘SM Station’ project that features solo and unit songs produced by various NCT members. Tracks from this special project are separate from official NCT record releases. Three songs – ‘Child’ by Mark, ‘Age of Light’ by Mark, Doyoung and Haechan, and the English-language ‘Rain Day’ by Taeil, Kun, and YangYang – have been released through ‘NCT Lab’ so far.

In other NCT news, SM Entertainment has confirmed that NCT 127 will make a comeback in September and that they are filming a music video for their return.

NCT 127 also recently announced a show in the Philippines for their ‘NEO CITY : THE LINK’ tour. They will be performing at the SM Mall of Asia Arena in Manila on September 4.