HomeMusicMy First Show Back: JoJo on Boston Hometown Show at The Sinclair...
Music

My First Show Back: JoJo on Boston Hometown Show at The Sinclair and Trying Not to Think About It Tour 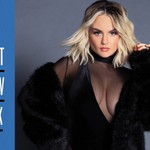 For the first time in 16 months, live music is returning nationwide after the global coronavirus pandemic ravaged the industry. Billboard’s “My First Show Back” is a series dedicated to sharing stories from throughout the touring ecosystem about what’s happening now, what has been forever altered and what will never change.

In this installment, singer-songwriter JoJo opens up about her first hometown show since the pandemic . At the show, JoJo played a mix of songs from her recently released EP, Trying Not to Think About It, and her previous albums. She also recalls feeling nervous heading into the tour after having time away from her fans during lockdown. (Her comments have been edited and condensed for clarity.)

I was feeling pretty anxious going into the tour. I really wanted to put on a great show for my fans, but I was nervous about being in front of them. I was kind of thinking about all the worst case scenarios of ‘What if I sound bad?’ or ‘What if they’re not happy with me?’ Just that negative way of thinking that sometimes I can fall into. I actually went away for two days and rented a little cabin in the woods for a mental health retreat and tried to get my mind right. I just needed a moment to reset. I worked with this brainspotting therapist named Dr. Mundo and it helped me feel much more confident, capable and excited about being in the moment for these days.

Honestly, I felt really calm when it came to showtime. The night before the first show in Boston, I felt grateful. My family was there, my boyfriend flew in for the first show and so did one of my best friends. I felt really supported. But I was nervous, because we didn’t get as much rehearsal time as I was hoping for it, since I was actually super sick. The week before, while we were rehearsing, I had a 101-degree fever. It wasn’t COVID, it was just a cold, but I was super under the weather so I prayed by myself and prayed with the band and my team. I remembered that everybody in the audience was there because they wanted to be and to go out and have a good time, because that’s what people can resonate with. We can feel when the person up on stage is really believing what they’re saying and doing or when they’re not, so I reminded myself of that.

Boston was super special, since there’s really no place like home — so the energy was great, especially to kick off the tour there. The New York show was really special for me too, since we were livestreaming to people around the world. There were only six cities on the tour, and each of them has meaning to me and in my life. Philly, Nashville, Atlanta and then wrapping up the tour in Los Angeles, and having my friend Demi [Lovato] and Nikki Flores come out. It was just beautiful to feel that support and to perform with other artists again.

This mini tour really exceeded my expectations, I knew that I wanted to get back out there and connect with my fans. I also needed to do it for myself just to feel competent as a performer. In the past few years, I kind of slowly but surely developed some stage fright. But this time, I felt so free. It was incredible that the fans already knew all the words to the songs on the new EP, considering it had only been out a few days. I was so grateful and excited. And it was so much fun.

Looking forward, I just want to keep upping the production value of the tours. We’ve been limited with our resources over the years, and I think people have a misunderstanding of just how expensive it is to go out and tour it — but I’d love to put on bigger, better and more entertaining shows from every aspect. I feel confident again, as a performer, vocalist and storyteller, and I want to add more components to that like dope lighting, video screens, dancers and more musicians and singers. With time.

I want to tell my fans: You’ve given me so much. I hope that what I’m able to give you makes you just a sliver as happy as what you make me like your support. You sing these words back to me. You talking s–t with me on Twitter — like, it’s so cool to be connected with all these people around the world through music, and through a similar spirit. A lot of us have lived different lives, but we’ve all felt similar ways and I think that’s really powerful. It’s always going to be my favorite part of what I get to do, which is connecting with people — so I appreciate everybody who chose to show up in person at the shows. It’s so gratifying to be in person again with people.

As told to Starr Bowenbank.