Music’s Latest Supergroup Is an NFT Project With Cartoon Apes 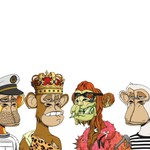 Bored Ape Yacht Club is one of Web3’s most successful NFT projects to date. It started when the U.S.-based company Yuga Labs minted 10,000 original ape cartoons as individual NFTs in April 2021. For buyers, purchasing a Bored Ape is viewed as both an investment and a status symbol (many owners set their social media avatars to the Ape they purchased to flex their ownership). All owners of Bored Ape NFTs have monetization rights to the characters, and the prices of the NFTs regularly reach six-figure sums. In September, a set of 107 Bored Ape Yacht Club NFTs sold for $24.4 million in a Sotheby’s auction, according to Reuters.

In a press release, the KINGSHIP project is billed as a “landmark, first-ever exclusive agreement to create a metaverse group.” Under the initiative, the team behind 10:22PM — a Web3, creator-focused record label founded by Celine Joshua — will develop and release new KINGSHIP music and products. Akin to pre-existing virtual idols like Miquela (or perhaps even a band like Gorillaz, who hid their human identities behind animated characters), KINGSHIP will be the front-facing digital performer used to cultivate a community and fanbase around the music.

Jimmy McNeils, an avid NFT collector who goes by the username j1mmy.eth, is supplying the Apes for KINGSHIP from his personal collection, including the rare Golden Fur and Bluebeam characters. The initiative to form a musical act around the cartoons will allow McNeils to monetize his Apes’ likeness and drive up their value, providing new potential use cases for NFT buyers and sellers.

The KINGSHIP project arrives on the heels of Mark Zuckerberg’s recent rebranding of Facebook to Meta, a reference to the metaverse. With interest in Web3 and the metaverse growing swiftly over the last year, 10:22PM is now setting its sights on creating the first musical icon of the burgeoning new era.

“Creating KINGSHIP has been incredibly fun and imaginative. I started 10:22PM to push the boundaries of innovation in the music industry and with KINGSHIP, we’re literally inventing what’s possible in real time,” said Joshua in a statement. “Just as we would with any artist or creator, my team and I will work with KINGSHIP to sharpen their vision and develop their unique sound. Each member of the group has their own story and personality that influences and contributes to KINGSHIP’s overall narrative. Through music and events across the metaverse, we will bring the Apes in KINGSHIP to life by building communities and utility, and entertaining audiences around the world.”

McNeils added, “This deal is a leading example of how powerful commercial rights are for collectible NFT projects and their collectors. I’m incredibly excited to explore this new area of NFT ownership with Celine Joshua and 10:22!”