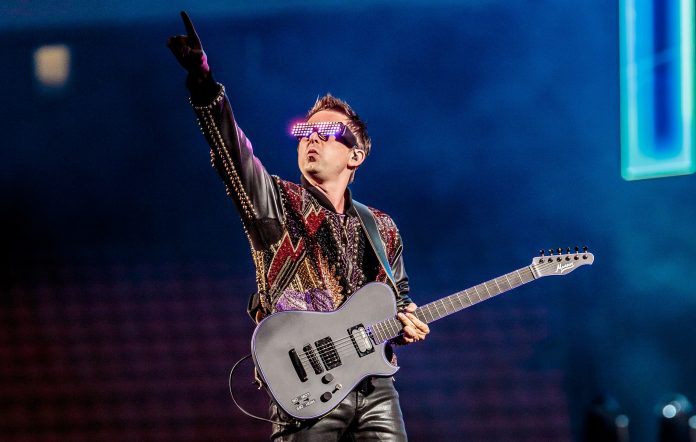 Muse‘s Matt Bellamy has launched a new Manson guitar range inspired by the first instrument he ever used made by the manufacturer.

Manson Guitar Works, the Devon-based guitar workshop which in 2019 Bellamy became a majority shareholder of after 20 years of them custom building his guitars, announced today (October 26) the release of the Manson DL-OR ‘Origin Re-issue’.

Calling the range “one of its most iconic instruments in the company’s history”, a description on Manson’s website said the new guitars are inspired by the aluminium clad guitar Bellamy played on tour following the release of Muse’s ‘Origin of Symmetry’.

“This production run version is the most closely replicated version of Bellamy’s first Manson Guitars instrument,” the description reads. “The original, which was used for Muse’s concert appearances from the launch of the ‘Origin Of Symmetry’ album onwards, was stripped and studied in detail at the Manson Guitar Works headquarters during the development and build programme of the DL-OR. Hence, the OR versions feature a fully clad aluminium body, just like the original instrument.”

You can see Bellamy brandishing the aluminium DL-OR guitar below:

There are two on-board effects for both the guitar: a USA ZVEX Fuzz Factory and a vintage MXR Phase 90 reissue, were modified at Manson Guitar Works. The DL-OR Relic model takes its electronic authenticity one step further, featuring the very last of the ZVEX Fuzz Factories to be made to the same specifications as those found in the DL-1 DeLorean.

Finding the components to make this possible was a stroke of luck, as according to ZVEX, its tech Shoua Thao happened upon the right germanium transistors after a number of years. “We have the correct transistors to make perfect replicas,” ZVEX said in a statement (via Guitar.com). “Hand soldered by the same person, on the same breadboard used to build the original DeLorean circuit.”

In 2019, Bellamy gifted Rage Against The Machine guitarist Tom Morello with his own custom six-string after he joined them on their recent UK tour. He also gave musical prodigy Nandi Bushell one of his signature Manson MBM‑1 guitars earlier this year.

The Manson website previously listed their famed M-series model for sale between £1,199 to £1,619. But Bellamy looked at plans to reduce the price, with the Satin Black and Starlight Silver instruments later made available to purchase for £569.

Meanwhile, Bellamy recently confirmed that Muse have started work on their new album, with the follow-up to 2018’s ‘Simulation Theory‘ inspired by “chaos and protests”.

Speaking to NME, Bellamy revealed that the band were considering moving back to their hometown of Teignmouth in Devon to write their next record.

“I like the idea of totally resetting and going back to where we come from,” he said. “As in, physically moving back to our hometown and getting back to how we used to be at square one. We’re likely to get in the studio next year to make a new album of some kind and then tour after that, depending on the travel restrictions.”

The frontman also revealed that he has bought the guitar that Jeff Buckley played on his classic album ‘Grace‘, and intends to play it on the next Muse record.