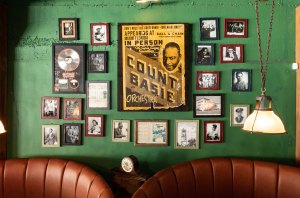 As Black History Month 2022 draws to a close, here’s a quick question. What do Billie Holiday, Count Basie, Rick Ross and Cardi B have in common? The answer: Ball & Chain, Miami’s legendary bar and lounge.

Located at 1513 SW Eighth Street (aka Calle Ocho) in the city’s Little Havana neighborhood, Ball & Chain boasts a storied past ripe with cultural touchstones dating back to its birth as the Ball & Chain Saloon in 1935. Before closing in 1957, the venue had evolved into a popular hotspot, welcoming Black entertainers such as Holiday and Basie. After a brief detour as a furniture store as the neighborhood hosted an influx of Cuban immigrants in the ‘60s, the Ball & Chain space remained vacant for some 20 years until Mad Room Hospitality resurrected the iconic live brand in 2014.

“When I purchased the building in 2007, I started to delve into its history,” says Fuller who, with partners and longtime friends Zack and Ben Bush co-founded Mad Room Hospitality. “And we were emphatic about bringing it [the Ball & Chain brand] back as if it had never closed. But more important, we were committed to providing live music and doing it without a cover [charge].”

That’s in keeping with Ball & Chain’s tagline during its heyday: “no cover, no minimum.” As is the revamped venue’s décor which retains “99% of the club’s original look and style,” says Fuller —down to the original concrete block walls and actual posters from the ‘50s advertising the club’s performers, which also included Lena Horne and jazz pioneer Chet Baker.

Fuller recounts that Ball & Chain’s storied past is also strongly tied to that of its former owner in the ‘50s, Jewish entrepreneur Henry Schechtman. A dealer in stolen liquor and bootleg cigarettes and a known affiliate of organized crime figure Meyer Lansky, Schechtman played an instrumental role in bringing a lot of entertainment to that part of Miami. And while racist policies barred Black performers from staying at local hotels, Schechtman also provided safe haven for them at his own Tower Hotel nearby.

“Henry was very progressive; the total opposite of the thinking in South Florida at the time,” says Fuller. “That’s why retelling this story now is so important; it’s such an exciting part of history. ”

And so are the next steps in Ball & Chain’s plans moving forward in the wake of the pandemic. While staffing back up to pre-Covid levels remains a challenge, the venue is preparing to soon reopen its rear patio called “The Pineapple” — so named because its band shell resembles an enormous pineapple. And the annual Ball & Chain Music Festival, coinciding with its anniversary in early September, will return after a two-year break.

In the meantime, Ball & Chain stays busy producing 100 hours of live music a week from noon until 9 p.m., primarily Latin jazz and salsa. Beyond 9 p.m. at least five nights a week, DJs play a diverse range of music including R&B and hip-hop, while guests in town are known to pop in from time to time to jam with local performers as well. In January producers reached out for permission to use Ball & Chain as the backdrop in the video for Rick Ross’s “Little Havana.” Prior to Covid, Cardi B and Bad Bunny filmed their video for “I Like It” at the venue in 2019.

For Fuller and his partners, the goal has always been to retain Ball & Chain’s organic authenticity. “We don’t see ourselves as owners,” he explains. “We’re curators of a significant South Florida asset both in terms of a physical footprint and music history. It doesn’t matter if you’re 21 years old or 95; on a welfare check or have high net worth. Everybody rubs elbows at Ball & Chain.”