HomeNewsMetallica’s Kirk Hammett says he wanted ‘Enter Sandman’ to be the next...
News 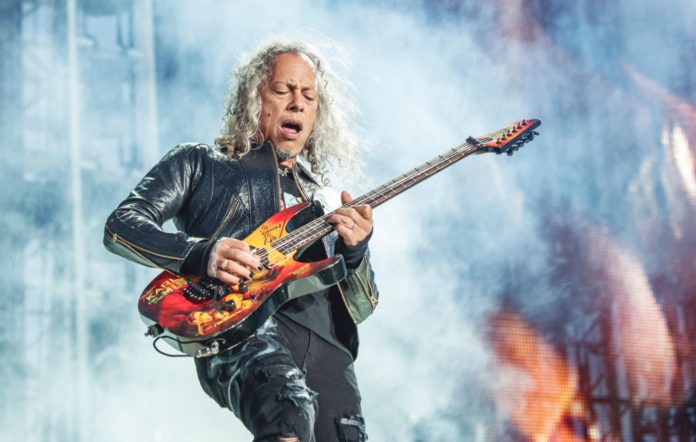 Metallica‘s Kirk Hammett has revealed that when he first sat down to write ‘Enter Sandman’, he wanted to make the next ‘Smoke On The Water’ by Deep Purple.

Speaking in a new interview, the guitarist went into detail about the classic song’s creation and how the riff was inspired by Soundgarden.

“I sat down and I said to myself, as I always do, ‘I want to write the next ‘Smoke On The Water’,’ And I just started messing around,” Hammett told Guitar World. “I got the swing kind of feel going, and then I was thinking of Soundgarden and how they were using dropped tunings.”

He explained that the song’s riff was conceived in the early hours of the morning in a hotel room while listening to Soundgarden’s ‘Louder Than Love’ during the band’s ‘Damaged Justice’ tour.

“This was when grunge was at its earliest stage – we’re talking late 1989 or so. No one was even calling it grunge yet. But I was loving a lot of it, and it was influencing me somewhat,” Hammett said.

“I wasn’t playing in a drop tuning, but with those tunings it’s often octave work – you get the low D, and then you go to the upper D and it sounds really heavy. I wasn’t in drop D, I was just in E, but I was messing around with the low and high octaves, and then I threw a tritone in there, an A#, went to the A, and that’s the riff that came out.”

He continued: “I remember that when the first part of it came to me, I thought, ‘It sounds like it’s asking a question, and now I’ve got to resolve it.’ So that’s where the chunky chord part, with the G and F#, came in. And famously, when I originally wrote the riff, that chunky thing happened at the end of every line.”

Metallica drummer Lars Ulrich then put the finishing touches to the ‘Black Album’ single, Hammett explained. “Then Lars said, ‘Repeat the first part.’ So we changed it to where we repeat the first part three times and then the chunky chords come in,” he recalled. “That made it hookier and bouncier – less heavy metal. It made a good-sounding riff fucking great.”

He added: “But if you think about the way the riff was originally – chunkier, more metal – you know, maybe it could have ended up on ‘…And Justice for All’.”

Meanwhile, Ulrich has shared an update on the status of Metallica’s long-awaited new material.

Speaking in a new interview with Zane Lowe for his Apple Music 1 show, the 57-year-old drummer was asked where the band are at with regards to a follow-up to 2016’s ‘Hardwired… To Self-Destruct’.

The post Metallica’s Kirk Hammett says he wanted ‘Enter Sandman’ to be the next ‘Smoke On The Water’ appeared first on NME.

Share
Facebook
Twitter
Pinterest
WhatsApp
Previous articlePaul McCartney sets record straight on who broke up The Beatles: “I didn’t instigate the split”
Next articleWatch Toyah Willcox perform cover of The Rolling Stones’ ‘Sympathy For The Devil’