HomeNewsMetallica fans can now by the ‘…And Justice For All’ album cover...
News 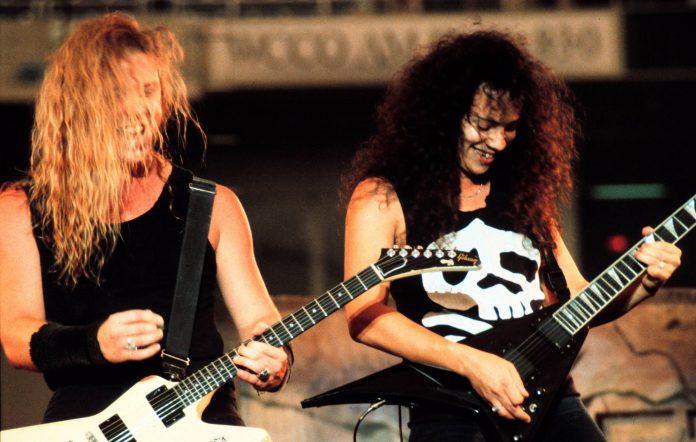 Metallica fans now have the opportunity to own a figurine of the statue that appears on the band’s ‘…And Justice For All’ album cover.

Only 1,988 copies of Lady Justice will be created, tying in with the album’s release date of 1988.

The figures come from Rock Iconz’ new ‘On Tour’ series of music memorabilia, which also features collectible statues of the members of Queen, individual figures of the four members of Metallica alongside other figures of Motörhead‘s Lemmy and more.

Announcing the new figures, KnuckleBonz – the company behind Rock Iconz – said on Instagram: Soon you’ll please their appetite, They devour. Hammer of justice crushes you, Overpower….

“Each are hand detailed and comes with a certificate of authenticity on the base. The new Rock Iconz ‘On Tour’ Series brings music fans and collectors moments in and around the world’s great live performances and world tours.”

Metallica recently celebrated the 30th anniversary of their classic LP ‘The Black Album’ by reissuing the record last month along with a special covers album, ‘The Metallica Blacklist’.

The band also recently performed the album in full during their set at Louder Than Life festival in Louisville, Kentucky.

Still to come in the anniversary’s celebrations include the release of a special photo book, The Black Album in Black & White.

The book features images of the band at work on their 1991 self-titled fifth studio album. The book features numerous classic and previously unpublished photographs of Metallica, including in-the-studio shots and images from the 300-date tour that followed the release of the record between 1991 and 1993.

The post Metallica fans can now by the ‘…And Justice For All’ album cover figurine appeared first on NME.

M.I.A. coaches her artificial doppelganger in the music video for ‘Popular’

With Clarkson jetting in, Gilas can now prepare as a complete crew