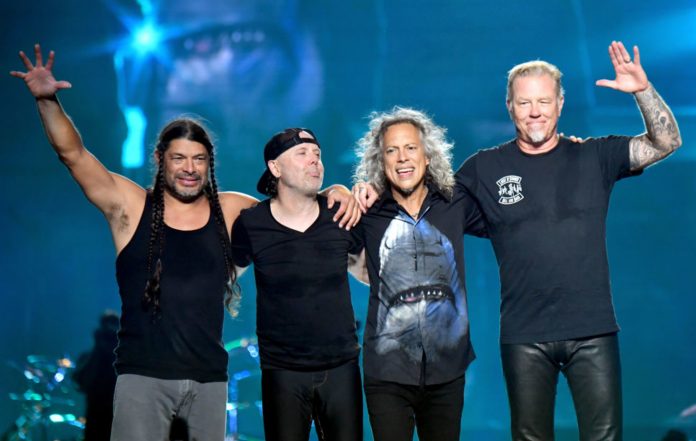 Metallica have announced the rescheduled dates for their South American tour with Greta Van Fleet – you can see full schedule below.

The band were due to embark on a six-date tour of South America back in April 2020 but were forced to postpone the dates after the global coronavirus pandemic shut down the live events industry.

“As the saying goes, the third time is the charm, and we’re excited to be in this space today to announce the re-rescheduled South American tour dates!” Metallica said today (October 26) in a statement (via Kerrang!).

“For those of you who have hung in there with us over the last 18 months since the original shows were supposed to happen, thank you for your tremendous patience! We truly cannot wait to finally visit South America for the first time in almost five years in April/May of 2022 as we head back for the originally planned six headlining shows, including two Brazilian cities we have never played in: Belo Horizonte and Curitiba. Still on board for the ride to open the show are our friends in Greta Van Fleet.”

The band continued: “Hang on to your tickets from those originally scheduled shows way back in April of 2020, as they will be honoured for the new dates. Where applicable, refund information is below; we encourage you to visit the website or location where you purchased your tickets for additional details should you be unable to join us in the spring of 2022. Please note that the Buenos Aires show is back to the original location of Campo Argentino de Polo, and tickets are still available for most shows.”

SOUTH AMERICA! The re-rescheduled tour dates you’ve been waiting for are finally set. We’ll be playing six shows with stops in Chile, Argentina, and Brazil in April and May of 2022.

“We wish you, your families, and your loved ones good health as we turn the page to the next chapter of this difficult time,” the band concluded. “We cannot wait to spend time in person with our extended Metallica family next year!”

You can see the rescheduled South American dates below:

Back in June, Metallica filed an insurance lawsuit against Lloyd’s Of London over losses suffered as a result of postponing the original South American tour dates.

Filed on June 7 in the Los Angeles Superior Court, the lawsuit alleged breach of contract, with the band seeking unspecified compensatory damages, according to CBS Los Angeles.

The lawsuit further detailed that Metallica bought a standard “cancellation, abandonment and non-appearance insurance” policy in order to cover their losses if any portion of the tour was postponed or cancelled, and that the band “timely turned to [Lloyd’s] for the promised and reasonably expected coverage for their losses”.

It also alleged that Lloyd’s Of London cited the policy’s communicable disease exclusion and “denied any coverage obligation whatsoever based on an unreasonably restrictive interpretation of the policy”.

Meanwhile, Metallica fans now have the opportunity to own a figurine of the statue that appears on the band’s ‘…And Justice For All’ album cover.

Only 1,988 copies of Lady Justice will be created, tying in with the album’s release date of 1988.