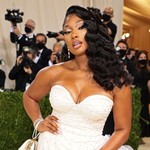 Megan Thee Stallion is almost done with her studies. On Monday, the rapper took to Twitter and told her followers that she has her special graduation cap ready to take her Texas State University grad photos.

“2021 finna graduate college,” the 26-year-old captioned photos of herself holding up her silver-rhinestone-encrusted graduation cap that says “real hot girl sh–” on the top. “Taking my grad pics today,” Megan added along with teary-eyed and heart-eyed emojis.

Megan’s Hotties flooded the comments section of her post with congratulatory messages, some of which saw people she met during her college journey extending their well-wishes. “Before I knew it was Meg. I use to help her transfer her credits to TSU every semester in the bell building!” a Twitter user wrote, which the rapper later retweeted to her feed. “Sis use to walk in saying ‘friend’ like that was the magic word, but it was ! She was just so positive & friendly, I had to help her. I’m so proud! You did it @theestallion.”

In a separate retweeted post, a user shared a video of her and Megan in a lecture hall after class and gave her a congratulatory message as well.  “Congratulations @theestallion the sweetest and most down to earth person you’d ever meet always at the front of the class ready to learn especially in Dr. Lawson’s class…another TSU HA grad we love to see it.”

In July, the “Thot Shit” rapper revealed that getting her degree in health care administration has been a journey for her. “My college experience has been a roller coaster!” she tweeted. “I started at PV went to some community colleges in between and I’m ending at TSU. Don’t get discouraged! You can chase your dreams and your education at the same time.”

Though Megan started to achieve acclaim for her rap talents while attending classes on campus, she revealed that she wanted to continue her studies to honor Holly Thomas, her mother who died in March 2019 after battling brain cancer. “I want to get my degree because I really want my mom to be proud,” she told People. “She saw me going to school before she passed.”

Megan also added that seeing her grandmother’s devotion to education inspired her as well. “My grandmother that’s still alive used to be a teacher, so she’s on my butt about finishing school,” the rapper added. “I’m doing it for me, but I’m also doing it for the women in my family who made me who I am today.”