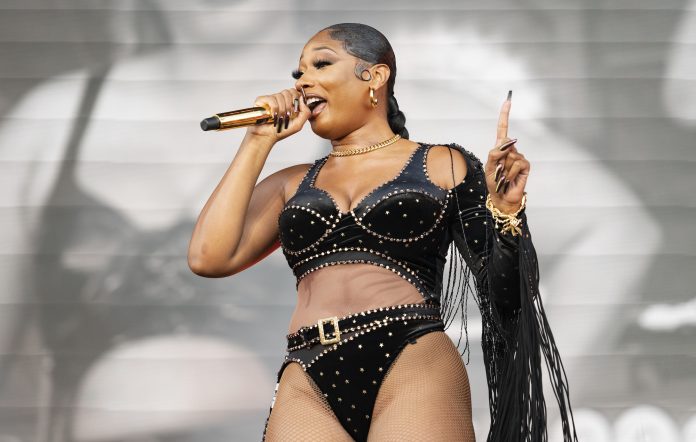 The new legislation, Senate Bill 8, bans most abortions in Texas and makes the state the most restrictive in the United States in terms of access to abortion services.

The restrictive laws prohibit abortions to take place once cardiac activity can be detected in the foetus. This timeframe is typically around six weeks, before most people know they are pregnant. There are no exceptions for cases involving rape or incest, and private citizens have the right to take legal action against anyone involved in assisting an abortion to take place.

During her set on Saturday (October 8), Megan told the crowd (via Billboard): “This middle finger is also to these motherfucking men that want to tell us what the fuck to do with our body.

“‘Cause how the fuck you gonna tell me what to do with my motherfucking body? Drop that shit.”

Following the set, she wrote on Instagram: “Y’all know I’m a Texas girl and we deserve better! Politicians want to cut off abortion access and control our bodies, lives, and futures — I’m speaking up.”

Yungblud, Maggie Rogers, St. Vincent and Lucy Dacus all spoke against the laws when they came into effect the first week of September. Dacus, along with Jack Antonoff, also pledged proceeds from their respective shows in Texas to charities that support abortions.

On October 1, Phoebe Bridgers officially released a version of Bo Burnham’s ‘That Funny Feeling’ on Bandcamp, with all proceeds going to a range of abortion funds in Texas.

Billie Eilish also took the opportunity to share her opposition to the law during her Austin City Limits headline set.

At one point during the show, Eilish admitted: “When they made that shit a law, I almost didn’t want to do the show because I wanted to punish this fucking place for allowing that to happen here.”

Elsewhere, Austin City Limits have apologised to Phoebe Bridgers for cutting her sound off before the end of her festival set last weekend.

Bridgers’ sound was cut in the lead-up to the climax of her ‘Punisher’ closing track ‘I Know The End’. Footage shows Bridgers continuing to play to the end of the track despite the interruption. Shortly after her set ended, she tweeted “lol fuck acl”.