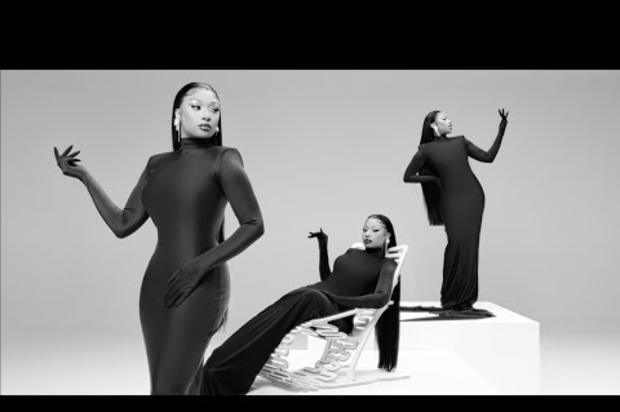 Megan Thee Stallion is back to the music and shows no signs of slowing down anytime soon. After releasing her highly anticipated sophomore album Traumazine over the weekend, the Houston Hottie blessed fans with visuals to her new dance single entitled “Her.” In the black and white Colin Tilley directed video, Megan models and dances alongside several replicas of herself, all while serving high fashion looks and her signature commanding flow.

The Grammy Award winning star’s 18-track project features guest appearances by Future, Latto, Pooh Shiesty, Rico Nasty, Jhené Aiko, Lucky Daye and Key Glock. Megan spoke about working with Future on the track “Pressurelicious”, revealing that she paid the Dirty Sprite rapper $250,000 for his verse. In an interview with Power 106 Los Angeles, Megan shared, “I had the beat for ‘Pressurelicious,’ right? I recorded the song, and I recorded it one way. And I’m like, ‘You know what? This would really sound hard if Future was on it. So I feel like being a woman in the industry, reaching out to a man trying to get a feature is always going to be a task. You never know what to expect.”

Fans are also assuming that Traumazine will be the 27-year old’s final album with 1501 Certified Ent. after she tweeted, “Y’all know I always have problems with dropping my music under this label, all these games and having to go to court just to put out my art has been so stressful. Thank you hotties for rocking with me through the bullshit WE ALMOST OUT. LETS STAY FOCUSED AND RUN THIS LAST ONE UP.” Check out Megan Thee Stallion’s “Her” video above.