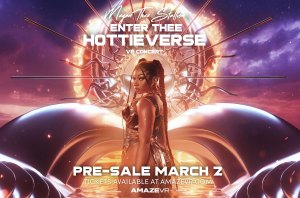 Megan Thee Stallion has teamed up with AmazeVR to announce the first-ever virtual reality concert tour, the two announced on Monday (Feb. 28). Slated to kick off in April, the 10-city jaunt will span the United States until July.

“Virtual reality has always been an interest of mine, and I’m glad that we’ll be able to make history with this experience,” the rapper said in a statement. “My hotties will get to watch me perform in a completely different and unique way, and I appreciate the AmazeVR team for helping me to bring this VR vision to life. I can’t wait to see the Hotties show up to the tour.”

“We are thrilled to work with Megan to launch AmazeVR’s very first VR Concert Tour,” said Ernest Lee, Amaze VR co-CEO. “She’s an artist who has incredible stage presence and can create iconic moments that will make the most of the VR technology we’re developing. If anyone could push the notion of how captivating a VR concert can be, it’s Megan.”

According to the press release, the VR concert will be a multi-song set that moves through a series of environments, and features hot custom wardrobes designed just for the show. Fans will be able to go to local theaters, put on the VR headsets (“Hottie Mounted Displays”), and wait in the VR Hottieverse lobby before watching Megan perform. Tickets go on sale on March 2 on AmazeVR.com.

On Megan’s latest episode of her Snapchat series Off Thee Leash With Megan Thee Stallion, she threw Normani the prom she never had at The Hot Girl Ranch. Megan also invited Normani’s dog Dior to the festivities to make the dance even more fun. Off Thee Leash is about Megan hanging out with her celebrity friends and their pets.

See Megan’s tour dates below for her Enter Thee Hottieverse US Tour 2022.