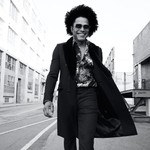 A week after announcing the partnership between his Musze label and BMG, Maxwell is back with more news. Along with the release on Tuesday (Nov. 16) of his new single “Off,” the artist revealed that his first full-length project under the new venture — blacksummers’NIGHT — will arrive in spring 2022.

The forthcoming project closes out the album trilogy that Maxwell launched in 2009 with the Grammy Award-winning BLACKsummers’night, which debuted at No. 1 on the Billboard 200. “Off,” the first taste from blacksummers’NIGHT, reunites the singer-songwriter-producer with his longtime creative collaborator, producer-musician Hod David. On the heat-seeking ballad, Maxwell couples his seductive invitation for romance with an enticing declaration, “And if I hit that spot/ We’re on a mission to go off.”

“From announcing a new partnership with BMG for my label Musze to receiving the Legend Award at the upcoming 2021 Soul Train Awards, I couldn’t be more excited to share this new single with loved ones offering a glimpse into NIGHT,” Maxwell said in a statement. The three-time Grammy winner is also partnering with the Black Promoters Collective (BPC), a coalition of African American independent promoters, to present the NIGHT 2022 Tour.

Featuring openers Anthony Hamilton and Joe, the 25-date arena tour begins in Dallas on March 2 with stops in Brooklyn, Los Angeles, Chicago and Atlanta before concluding in Miami on May 8. Pre-sale starts Nov. 22 with tickets going on sale to the public on Nov. 29.

Calling Maxwell one of the most respected artists in the industry, Black Promoters Collective CEO Gary Guidry said, “His body of work and showmanship are second to none. We believe he has a true connection to the culture. We are happy to partner with him on the NIGHT Tour and look forward to growing this relationship for years to come.” BPC president Shelby Joyner added, “Maxwell’s music has been the soundtrack to many of our lives. People are ready to return to live music and regain a sense of normalcy. As a partner, we look forward to not only promoting the NIGHT Tour, but also creating space for Maxwell’s fans to safely listen to and enjoy the music they love so much.”

Check out the dates for Maxwell’s 2022 NIGHT tour and listen to “Off” below: