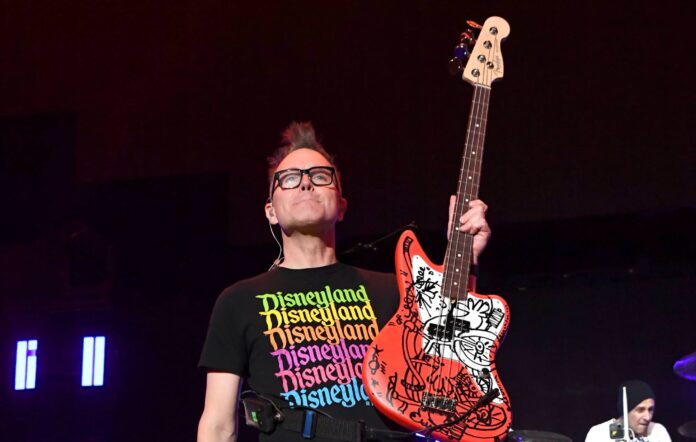 Mark Hoppus has played his first live show since 2020, joining Beauty Schoo Dropout on stage – check out the moment below.

Last June, the singer/bassist revealed he was diagnosed with cancer – a stage 4-A diffuse large B-cell lymphoma. Following intensive treatment, he later shared the news that he was cancer-free last September.

Back in April, he teased that he’d been working on new music, saying in an interview that he’d been itching to “get back into the studio” after beating cancer.

Now, he’s made his stage comeback, appearing on stage with Beauty Schoo Dropout. Check out the moment here:

This was Mark’s first live show since January 2020!

ALMOST FAMOUS is part of “We Made Plans & God Laughed”, BSD’s debut album that came out today.

Earlier this week, Hoppus discussed his newly rekindled friendship with Tom DeLonge, saying that he’s “open to whatever the next phase of” Blink-182 is.

Speaking to People, Hoppus said that while Blink have not reunited with DeLonge, he and Barker did meet while Hoppus was receiving his cancer treatment. He went on to say that a reunion is not explicitly off the cards. “I keep writing music, and I’m open to whatever the next phase of Blink is,” he told the publication. “I’m hopeful for the future. I’m just damn glad to be here.”

Hoppus explained that shortly after Barker and DeLonge had learned of his diagnosis, the pair visited him. “It was the first time that all three of us were in the same room in like five years,” he told People, noting that despite the heavy topic at hand, the meeting with his current and former bandmate was “actually better than it used to be”.

He continued: “There was no agenda. There were no lingering grudges. It felt very back to what it should be: three friends sitting in a room.” Reconnecting with DeLonge, Hoppus said, offered him a “panacea” during what he described a “brutal” chemotherapy sessions. As for the current state of their friendship as a trio, Hoppus assured People that “everybody’s in a really great place right now”.

A few months after Hoppus was declared cancer free, he said he would be open to making a comeback with Blink, in whatever form that would be.

Meanwhile, DeLonge is gearing up to release his directorial debut, Monsters Of California, later this year. The first trailer for the film arrived in May – check it out here.