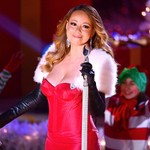 Mariah Carey is a patient woman. But when it comes to Christmas cheer, she has her limits. After recently telling us it was too early to start jingling bells in the midst of Halloween season, at midnight on Sunday (Oct. 31) she finally said goodbye to all things spooky and officially ushered in the holiday season.

In a brief video that opened with a Halloween tableau featuring candles, tombstones and gourds arrayed in front of a series of three pumpkins carved with the words “It’s Not Time,” Carey strutted out in a glittery red floor-length gown and matching heels as she happily swung a candy-striped baseball bat.

As spooky music played behind her and the sound of a clock ticked down, Carey wound up and demolished the “Not” pumpkin with gusto as the clock struck midnight and she busted out into giggles. Of course that’s when Carey’s titanic 1994 classic, “All I Want For Christmas Is You,” busted out and the Halloween decorations disappeared and MC was magically transported to a winter wonderland.

Carey did a quick-change into a shimmery Santa suit, tossed some snow in the air, dangled an ornament and gave a quick glimpse of a wrapped present that had Nov. 5 written on it, which the Lambily took to mean that the Christmas Queen is planning to drop something festive on Friday. The clip ended with the phrase: “It’s Time!!! To smash that pumpkin and treat it as pie… cause we still gotta get through Thanksgiving!!!”

Carey’s “All I Want” hit No. 1 on the Billboard Hot 100 songs chart for the second time last December.

Watch Mariah get in the spirit below.