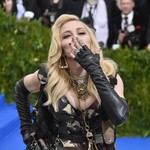 Shades of Marilyn Monroe punctuate Madonna’s new cover shoot for V magazine, a deliberate tribute to Bert Stern’s “The Last Sitting” — the last photo shoot Monroe sat in for in 1962 before her untimely death at age 36.

Fresh off the release of her Madame X Paramount+ concert documentary film chronicling the tour that supported her 14th studio record of the same name, the Queen of Pop graced V magazine’s latest issue with clear inspiration from the late actress. For the interview, Madonna discussed everything from her 40-years-and-counting career to how she keeps the energy alive for pop music.

Photographer Steven Klein shared some insight behind taking inspiration from “The Last Sitting,” stating upfront that they did not wish to merely re-create the photos.

“When I sent Madonna the photos she was really taken by the incandescent fragility of Marilyn at that moment in her life,” Klein said. “We decided to find a hotel suite and try to capture the liaison between a star and the camera, the mystery, and magic of this creative collaboration. We hope we have done justice to the great work of Bert Stern and Marilyn Monroe.”

Donning expensive furs, glamorous makeup and a hairstyle that perfectly captures Monroe, Madonna re-created many of the iconic poses and shots from “The Last Sitting,” paying homage to a pop culture icon that her career has undoubtedly been inspired by over the years.

Further in the interview, Madonna shared praise for Kanye West’s latest studio effort, Donda, proclaiming that it was the only recent record to inspire her artistically because she doesn’t think many artists are “working toward failure” like he is.

“I can’t say that I agree with all of his politics and the way that he thinks of women, or unmarried people having sex, or the gay community. But his work is on the razor’s edge, and it’s inspiring and it’s rare,” Madonna said. “Everybody was waiting so long for his record to come out and then finally when it came out, everybody else’s record came out too. And he still stood out.”

Check out photos from the shoot below.

Share
Facebook
Twitter
Pinterest
WhatsApp
Previous articleMy First Show Back: JoJo on Boston Hometown Show at The Sinclair and Trying Not to Think About It Tour
Next articleThese Nike Air Force 1s Double Up On The Pull Tabs And Swooshes