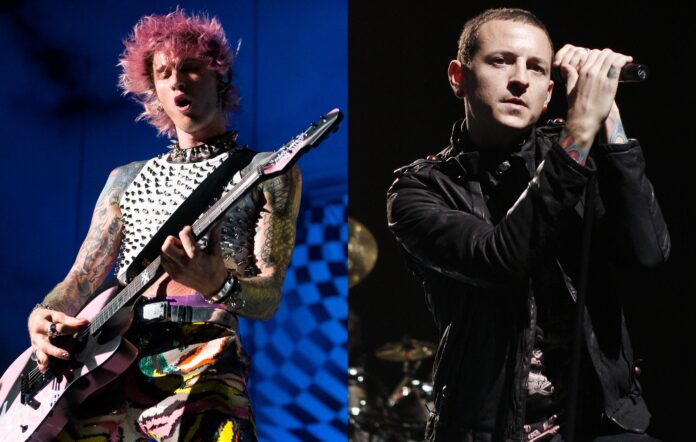 Machine Gun Kelly paid tribute to late Linkin Park frontman and “great human being” Chester Bennington during his concert at OVO Arena Wembley in London over the weekend.

A month before Bennington’s death in 2017, Kelly performed with Linkin Park in Poland, and was set to support the band on the North American leg of their ‘One More Light’ world tour, which was cancelled following Bennington’s passing.

“We had a tour that we were about to start and three days before we started that tour, Chester passed away,” Kelly told the audience. “The last time I saw him was here in Europe, so I encourage you, because life is short, to go live this life. I know it’s hard, man. I know this shit is fucking hard. But nights like tonight make life worth it.”

Kelly then performed his 2019 ‘Hotel Diablo’ cut ‘Glass House’, on which he reflects on the passing of artists including Nipsey Hussle, Lil Peep and Mac Miller. “Last time I got off the stage, I looked Chester in the face / But now he gone, and ain’t no going back,” Kelly raps on the track.

Elsewhere during the Wembley gig – which took place as part of Kelly’s European and UK tour in support of latest album ‘Mainstream Sellout’ – Kelly was joined by Skepta and Yungblud, as well as tour supports Iann Dior and 44phantom at various points throughout the evening.

“Making Wembley Arena feel intimate, Machine Gun Kelly owns the stage for the duration of the concert,” NME said of MGK’s Wembley Stadium show in a four-star review. “Backed by a five-piece band, the aggressive moments from his past two albums shake the foundations of the venue while cuts from the rap-heavy ‘Hotel Diablo’ inspire countless moshpits.”