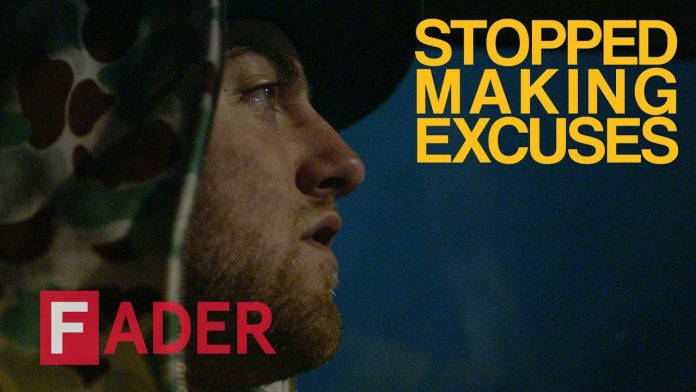 “I’m probably going to cry a few times through the course of this thing,” Mac Miller says in the first scene of Stopped Making Excuses, a new documentary produced and presented by The FADER.

What follows is a candid look at the Pittsburgh native’s past six years, starting with his ascent, when he was 19, as a popular but critically panned rapper. “I was an easy target. I admit that,” he says now. “It became one of those things where I got so much negativity that it almost became, like, ‘There’s no point to overly hate on this dude, let me look in and see what he’s doing.’ And when you look in, there’s some good music there.” Following his 2011 debut album, Billboard’s first independently released No.1 in over a decade, Mac moved to Los Angeles, where it seemed to many he was thriving. That’s where Andrew Nosnitsky met him for Mac Miller’s 2013 The FADER cover story, and where he played an endearing role in Earl Sweatshirt’s cover too.

But Mac says L.A. soon turned toxic, as he spiraled into increasing drug use. In one scene in Stopped Making Excuses, French Montana counsels him to slow down with codeine. In another, Mac appears in a bathtub wearing a long-sleeved shirt, top hat, and sunglasses, while saying “I’m not on drugs… drugs are on me.”

To finish 2015’s acclaimed GO:OD AM, he headed back to Pittsburgh to regain his composure. Watch him lead the Steelers onto the field, eat one of those weird sandwiches with french fries on it, and perform in his Taylor Allderdice High School graduation gown.

Now, he’s living in New York, trying to make sense of his past and orient himself to an independent, healthy future. “I’d rather be the corny white rapper than the drugged-out mess that can’t even get out of his house,” he says. “You don’t go down in history because you overdosed.”