HomeNewsLzzy Hale explains why she and Amy Lee chose to cover Linkin...
News 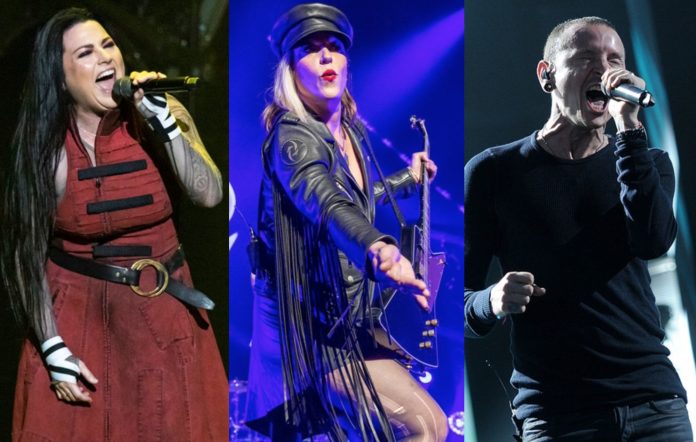 Evanescence performed a cover of Linkin Park‘s ‘Heavy’ last week with help from Halestorm‘s Lzzy Hale – you can watch it below.

The Amy Lee-led band performed at the Heritage Bank Center in Cincinnati, Ohio, on Friday (January 14) in a joint concert with Hale’s band as part of their previously rescheduled co-headline tour.

Lee and Hale have been performing the song on every date of the US tour – which ends on January 21 in Newark, New Jersey. In a recent interview with 105.7 The Point, Hale explained their decision to cover the track.

“[Amy and I] were lobbing a couple of ideas back and forth and then, all of a sudden, we landed on Linkin Park. And [we thought], you know what? That would be really cool because inadvertently it would be a tribute to Chester, but also, everything that this song has been about, we’ve all been through that – everybody.

“And so it’s almost this like very church moment where you walk out onstage and you’re, like, ‘All right. This is my church. These are my people. We’re all doing this together.’”

You can watch the pair’s cover of ‘Heavy’ below:

Evanescence’s setlist for the Cincinnati show was as follows:

Last year, Linkin Park‘s 2001 hit ‘In The End’ hit one billion streams on Spotify, making it the first nu-metal track to do so.

The ‘Hybrid Theory’ single passed the landmark, following on from its accompanying music video achieving the same on YouTube in 2020.

A new range of guitars and gear designed by the singer and songwriter were also been announced, with Hale also being named on the Gibson Gives Advisory Board.

The post Lzzy Hale explains why she and Amy Lee chose to cover Linkin Park’s ‘Heavy’ appeared first on NME.