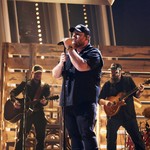 Following his entertainer of the year win at Wednesday’s (Nov. 10) CMA Awards, Luke Combs has announced several stadium shows for next year, including performances at Denver’s Empower Field at Mile High on May 21, Seattle’s Lumen Field on June 4 and Atlanta’s Mercedes-Benz Stadium on July 30.

Joining Combs for these shows will be Zach Bryan, Cody Johnson and Morgan Wade.

Combs currently has a top 5 hit on Billboard’s Country Airplay chart with “Cold As You,” which is the seventh single to be released from his What You See Ain’t Always What You Get project. During his CMA Awards performance on Wednesday, Combs debuted a new song, “Doin’ This.”

“This song means a lot to me personally,” Combs said via a press release. “Not to recite the lyrics, but for me, it’s truly about playing country music for a crowd, whether that’s 70 people or 70,000 people, and playing country music with my buddies in the band. It really doesn’t matter where we’re playing or how many people we’re playing for because it isn’t about the fame, the fortune, the name, or the glory. It’s about getting to make and play country music.”

Combs also noted the swirl of career happenings over the past few days, saying, “This week has been a whirlwind – got to debut a new song on the CMAs, release the song and music video to my fans, and announce three stadium shows at NFL stadiums. Talk about a week! It will be hard to top this one.”

Tickets for these newly confirmed stadium shows will be available for pre-sale beginning Wednesday, Nov. 17 at 4 p.m. local time via Ticketmaster Verified Fan. The general on sale will open Friday, Nov. 19 at 10 a.m. local time.

Combs also recently released the track “South On Ya,” which was added as the official theme song for the SEC Network’s 2021 football season.