HomeNewsLondon’s KOKO to reopen in April with gigs by Pete Doherty, Jorja...
News

London’s KOKO to reopen in April with gigs by Pete Doherty, Jorja Smith and many more 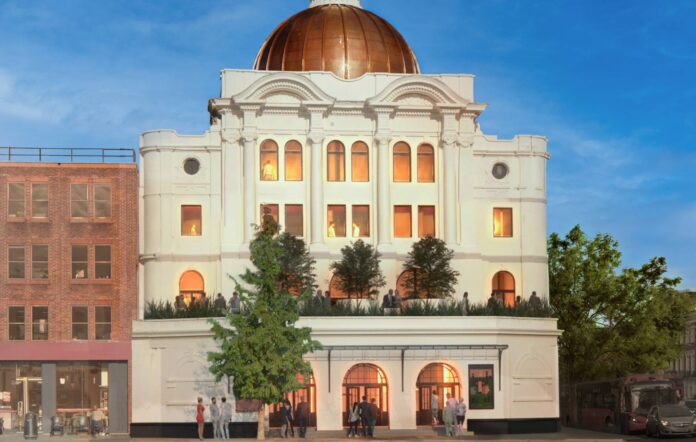 The north London music venue KOKO is set to officially reopen in April following a £70million restoration and redevelopment.

The venue, which is located on 1A Camden High Street, initially shut in 2019 for a planned one-year refurbishment, though those plans were scuppered after a fire broke out at the venue in January 2020 before the coronavirus pandemic and “colossal water damage” then further held up progress.

READ MORE: Independent Venue Week 2022: “Now more than ever, small venues need to be shouted about”

KOKO’s restoration and redevelopment has now been completed, and it intends to relaunch next month as a “50,000-square foot state-of-the-art live music venue and broadcasting house”.

The new rooftop of KOKO in London (Picture: Press)

New additions to KOKO include its 200-capacity Fly Tower ‘venue within a venue’, a new shop/DJ space (which will feature “exclusive merch drops and artist collaborations”) and a morning to late-night pizzeria and tap bar, with Café KOKO also set to host intimate live performances.

After Lianne La Havas recently announced a trio of shows at KOKO in May, the venue has this morning (March 1) confirmed a host of names who will perform as part of its relaunch.

The likes of Pete Doherty, Jorja Smith, Kim Gordon, Tems, Portico Quartet, Omar Apollo, Remi Wolf and more have all confirmed gigs at KOKO in the coming months. You can find the venue’s calendar of events here.

A new club night, KOKO Electronic, will also take place on Friday and Saturday nights until 6am, with the likes of Todd Terje, Jayda G and 2ManyDJs booked to perform so far.

The dome of KOKO in London (Picture: Press)

“It’s been a seven-year journey to bring this project to life and now, on the cusp of opening, I’m so happy to be paying homage to the cultural legacy of the building with a diverse mix of artists and contributing to arts and culture at a time when British live music needs it most,” Olly Bengough, CEO/Founder of KOKO, said in a statement.

Elsewhere, the Music Venue Trust will operate as the official charity partner of the BandLab NME Awards 2022, which will take place tomorrow (March 2) at London’s O2 Academy Brixton. Tickets to the event remain are on sale now and are available here.

The post London’s KOKO to reopen in April with gigs by Pete Doherty, Jorja Smith and many more appeared first on NME.