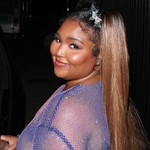 Lizzo is ready for scary season. The “Rumors” rapper teamed up with actress Sarah Paulson for a pair of TikTok videos in which they hilariously recreate one of the most horrifying scenes from Paulson’s series American Horror Story. In the videos posted on Monday Lizzo and Paulson lip synch to a fan-favorite scene from the second season of the scary FX anthology series, Asylum.

“Help! He’s escaping!” The killer is escaping!” they fake scream together in a remake of the line Paulson’s Lana Winters wails in the 2012-13 season of the Ryan Murphy series set in 1964 at the fictional Briarcliff Manor mental hospital. Not even trying to make their lips move in time, the pair calmly recite the lines while crammed into frame together, with Paulson wearing a plaid jacket and Lizzo rocking a flowery top with matching flower scunchie.

In a second version, though, they get hilariously unhinged, screaming the line in tandem while barely containing their laughter. To date the two videos have racked up nearly 30 million views.

As The Insider reported, the line began going viral in July on TikTok, with more than 370,000 videos so far, including one from Billie Eilish.

Like a lot of TikTokers, Billie took a different tack, flaring her nostrils to the strains of Paulson’s wailing instead of mouthing the words with the caption “hate that you guys made this sound huge on here. most infuriating scene in all of asylum.”

@billieeilishhate that you guys made this sound huge on here. most infuriating scene in all of asylum