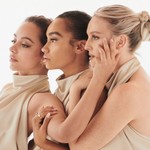 Up until now, Little Mix have kept things pretty quiet when it comes to the tensions that led to former member Jesy Nelson splitting with the quartet last year. But in a candid interview with The Telegraph, the now-trio — Jade Thirlwall and new moms Perrie Edwards and Leigh-Anne Pinnock — talked about their future as three and weighed-in on the recent “Blackfishing” controversy that set them against their former longtime bandmate.

“Capitalising on aspects of blackness without having to endure the daily realities of the Black experience is problematic and harmful to people of colour,’ said Thirlwall in the interview. The chat came after the leak of messages between Pinnock, the only Black member of the group, and a friend appeared to show Leigh-Anne accusing Nelson, who is white, of appearing in dark spray tan, fuller lips and using a “Blaccent” in the video for her song “Boyz,” which features Nicki Minaj. “We think it’s absolutely not OK to use harmful stereotypes. There’s so much to say on that subject that it’s hard to sum up in a sound bite.”

Nelson, who was vehemently defended by Nicki, pointed out in an earlier interview with Vulture that she had never faced blackfishing accusations the whole time she was in LM. “And then I came out of [the band] and people all of a sudden were saying it,” she said. “I wasn’t on social media around that time, so I let my team [deal with it], because that was when I’d just left. But I mean, like, I love Black culture. I love Black music. That’s all I know; it’s what I grew up on.” Minaj suggested that Pinnock was trying to ground Nelson’s budding solo career, lashing out at the trio as “jealous, miserable clowns.”

Pinnock addressed the racism she’s faced as a Black performer in a May 2021 documentary, Race, Power and Pop, and the three told the Telegraph that they would rather move on and not discuss the simmering feud. “We don’t really want to dwell, because we have so much to celebrate as a three,” said Thirlwall.

“We’ve dealt with it in the best way that we know how, and got each other through it. We don’t want to talk about the video, or be critical, but one thing we will clarify regarding the blackfishing situation is that Jesy was approached by the group in a very friendly, educational manner,” she added, with the story noting that the conversation took place before Nelson left the band.

Several months after the Dec. 2020 split, Nelson told Comsopolitan UK that she didn’t know joy until she left the group she co-founded more than a decade ago. “I didn’t know that I could be this happy. I thought when I was in the group that it was just normal to feel that way. And because I’d felt like that for 10 years, I just thought, ‘This is life.’ Since I’ve left, I feel free,” she said in the interview, which came after she announced her leave-taking in an Instagram post in which she cited her musical high points with LM, as well as the grueling toll the band took on her mental health. “I don’t wake up with anxiety, thinking, ‘I’ve got to do a music video today, I need to starve myself.’ Or, ‘I need to go on an extreme diet so I can look like the other three.’ That was consuming me.”

Nelson also noted at the time that even after she left the group she was still getting compared to Thirlwall, Edwards and Pinnock, marveling at how hurtful it was to be held up against something you don’t accept anymore. “Now I feel like me. When I look back [at my time] in the band, I genuinely wasn’t me. I can’t believe how miserable I was,” she said.

In the Telegraph chat, Edwards said the mega-successful U.K. girl group — with sales of more than 60 million albums since winning The X Factor in 2011 — knew they had “something special, and we loved our sisterhood, so we wanted it to last forever.” As for how they will move forward, Thirlwall said they are all focused and moving in the same direction.

“We all very much had the same goal of being equal, and the constant acknowledgement of the bigger picture, rather than the smaller, petty things,” she said. “We’ve really worked hard and always had this underdog mentality. As a girl band coming from a show like The X Factor, it always felt like there was this point to constantly prove.” Part of that moving forward is the recent release of their latest single, “Love (Sweet Love).”