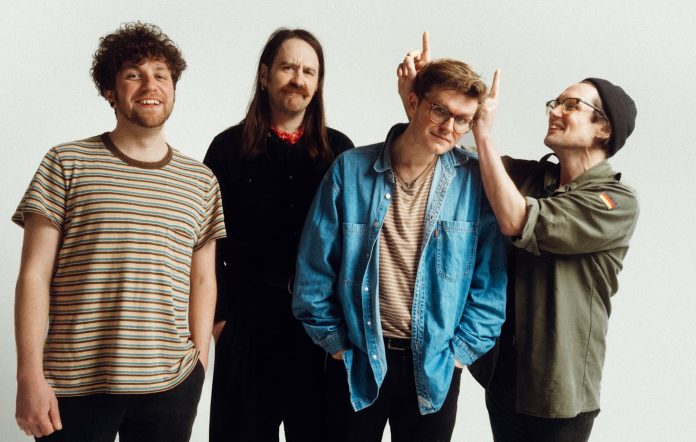 Yard Act have shared a cover of Elton John’s ‘Tiny Dancer’ – listen to it below.

Speaking about the cover, which the group told NME about last week, Smith said: “We did ‘Tiny Dancer’ ‘cause our new best pal Elton has been so kind about us in the press recently.

“A song like ‘Tiny Dancer’ seems so far removed from what people assume Yard Act is, we thought it would be a really interesting way of showing not only our own versatility, but also the versatility of a song as good as ‘Tiny Dancer’.”

John personally gave his blessing to the group for their cover in a “personal telephone call to frontman James Smith,” according to a press release.

You can listen to the cover here.

John has previously spoken of his admiration of Yard Act. Speaking to NME in last year’s Big Read, John said of the band’s style: “I can’t do it but I love it and I wonder how they do it.”

In this week’s NME Big Read with Yard Act, the group responded to John’s praise saying: “It was mind-blowing, I fucking love Elton John; I want to write some lyrics for him. I’m hoping we’ll bump into him at some point.

“We’re doing a live cover of ‘Tiny Dancer’ to get his attention to pique his interest. It could go completely wrong, but you’re better off giving something a go. People are so fucking precious and judgemental: do something rather than nothing; we’re all gonna be dead soon.”

When asked if they’d like to do a collaboration, Smith replied:  “A hundred per cent! Can you imagine a band meeting where someone flagged they didn’t want to work with Elton John? They’d be booted instantly. I’d fucking love to work with him! We’d do a drive-in rock’n’roll song. I’d write some words for him to sing and then I’d join in on the chorus. It would be well good, like ‘Crocodile Rock Part Two’.”

The Leeds group also shared another new single from their upcoming new album, ‘Overload’, which is released this Friday (January 21). ‘Pour Another’ follows on from previously released singles, ‘Rich’, ‘Payday’ and the album’s title track.

Speaking about their latest track, Smith added: “‘Pour Another’ zooms in on the post-party conversations many hedonists will be all too familiar with.

“It leaves the impending doom of daily life in a world on fire at the door, at that point in the night when you don’t want to let go of the moment you’re in, when everything is perfect and everyone is your new best friend. Those moments fade, because nothing stays as it was. You’re woken with a bang and you have to face the truth.”

They’ll showcase the record on their 2022 UK headline tour, which kicks off next month (find ticket details here).