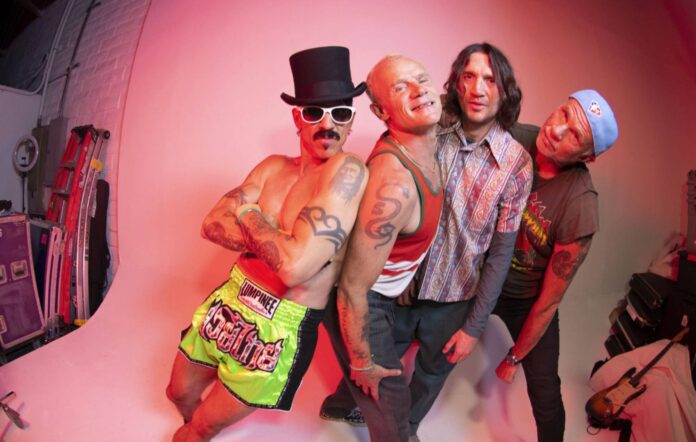 Red Hot Chili Peppers have today (August 19) shared a trippy new single called ‘Tippa My Tongue’ – check it out below.

The track, which leans into fuck and rock, is the first taster of their upcoming new album. Last month (July 24), the band surprised fans by announcing that they would be releasing a new album this October.

The album, which has once again been produced by Rick Rubin, is called ‘Return Of The Dream Canteen’ and will arrive on October 14 via Warner Records. You can pre-order the album here.

Earlier this year, the band told NME they had a “loose plan” to release another new album in the immediate future, just months after their last, ‘Unlimited Love‘. “We’re gonna put out music by the handful – literally,” singer Anthony Kiedis said. “Don’t be surprised if another wheelbarrow of songs comes your way in the near future. We have a lot of shit to turn people onto.”

Check out the new single here:

Speaking about the new album, the band said in a statement: “We went in search of ourselves as the band that we have somehow always been. Just for the fun of it we jammed and learned some old songs. Before long we started the mysterious process of building new songs. A beautiful bit of chemistry meddling that had befriended us hundreds of times along the way.

“Once we found that slip stream of sound and vision, we just kept mining. With time turned into an elastic waist band of oversized underwear, we had no reason to stop writing and rocking. It felt like a dream. When all was said and done, our moody love for each other and the magic of music had gifted us with more songs than we knew what to do with. Well we figured it out.

Two double albums released back to back. The second of which is easily as meaningful as the first or should that be reversed. ‘Return Of The Dream Canteen’ is everything we are and ever dreamed of being. It’s packed.”

The band announced the news as they kicked off their tour in North America at Denver’s Empower Field.

They began their stadium tour at the Estadio La Cartuja in Seville in June. Five new tracks from ‘Unlimited Love’ were played during the 18-song set – ‘Aquatic Mouth Dance’, ‘Here Ever After’, ‘These Are The Ways’, ‘Whatchu Thinkin’’ and lead single ‘Black Summer’. The band started the show with 2003 smash ‘Can’t Stop’ and played plenty of hits throughout the night, including ‘Scar Tissue’, ‘Californication’ and ‘Give It Away’.

Reviewing the show, NME said: “The second Anthony Kiedis struts onto the stage and launches into a thundering ‘Can’t Stop’, the Chili Peppers are urgent and excited. What follows next is a viciously playful 100-minute set that sees the band show off their impressive legacy but also underlines why they’re still such a daring rock band.”