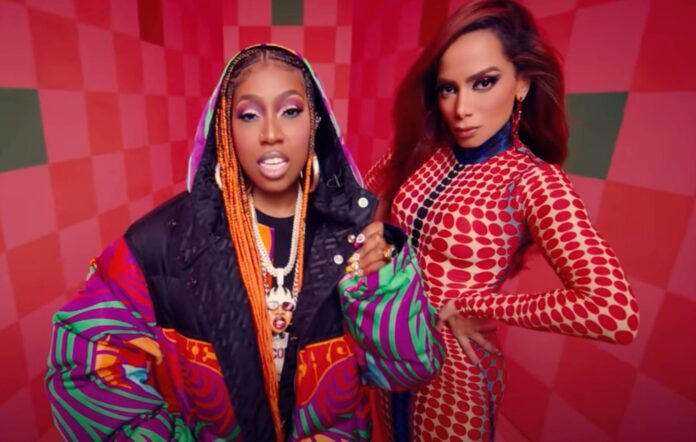 READ MORE: Five things we learned from our In Conversation video chat with Anitta

The trippy new song centres around a night in a hotel and features Elliott on the song’s verses rapping. “Missy and Anitta, we rolling up to the party/ That hottie, he can get the keys to my Bugatti,” Elliott says on the song’s second verse.

The video was directed by Arrad and takes place in a hotel. Fans online have been comparing the videos bright colour palette to Cardi B and Megan Thee Stallion’s ‘WAP’ video.

‘Lobby’ is set to appear on the deluxe edition of Anitta’s album ‘Versions of Me’. This expanded album will be released on out August 25 via Warner.

Check it the new song here:

Earlier this month, it was revealed that a street in Missy Elliott’s hometown is being renamed in her honour.

Portsmouth, Virginia, has decided to rename a portion of a street ‘Missy Elliott Boulevard’ after a unanimous vote by the City Council on Tuesday evening (August 9).

Missy Elliott herself responded to the news when it was shared by a reporter.”I am forever grateful,” Elliott tweeted.

Back in April, Anitta meanwhile took to Coachella’s main stage and was joined by two special guests, Snoop Dogg and Saweetie. Snoop showed up during the first song in Anitta’s set, ‘Onda Diferente’, much to the delight of fans online and in the crowd.

Not long after, the Brazillian singer brought another California bred guest to the stage, Saweetie, who helped her perform their joint single, ‘Faking Love’.

The 29-year-old singer-songwriter, released her trilingual album ‘Versions of Me’ on April 12. The album was produced by OneRepublic’s Ryan Tedder and features collaborations with Cardi B, Khalid and Saweetie.

In a four-star review of ‘Envolver’ NME said: “Given its gleeful genre-hopping and array of features, it would be a stretch to call ‘Versions of Me’ cohesive or streamlined, but it’s held together by Anitta’s ambition and charisma. She knows exactly what she wants – and on this evidence, she’s going to get it.”