HomeMusicLil Nas X Finds Out Who the Daddy Is in ‘Maury’ Confrontation...
Music 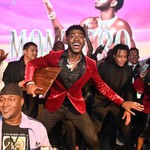 Lil Nas X is up to his tricks again. In a promo video for what purports to be an upcoming appearance on the “who’s your daddy?” syndicated daytime series Maury, the rapper takes the stage to confront the “love of his life” only to find out a shocking truth about the man he thought was forever.

After presenting him with a bouquet of roses, Lil Nas finds out his ex Yai is married… to a woman, and he has a kid! “Me and Yai have been together for about a month and a half,” the rapper tells Yai’s baby momma as the crowd erupts in lusty booing. “You’re a liar!” she says. Now, eagle-eyed observers might notice that Yai is dancer Yai Ariza, who co-starred in the steamy “That’s What I Want” video as Lil Nas’ locker room lover and that the wife in question also appears to be the same actress who appeared as the other woman in the song’s official clip.

“This might be your baby Maury,” Lil Nas jokes as the host laughs about the paternity puzzle. The rest of the video features a classic Maury montage featuring the reveal of DNA test results, smashed roses, a screaming match, smug smiles at the camera, what appears to be a proposal and the MC sprinting off the stage.

The whole thing appears to be a promo for… something tied to the single, as the episode title is “Leave Your Wife For Me… That’s What I Want!” So, tune on Wednesday (Nov. 17) to find out what Lil Nas has up the sleeve of his puffer jacket.

Watch the Maury preview below.