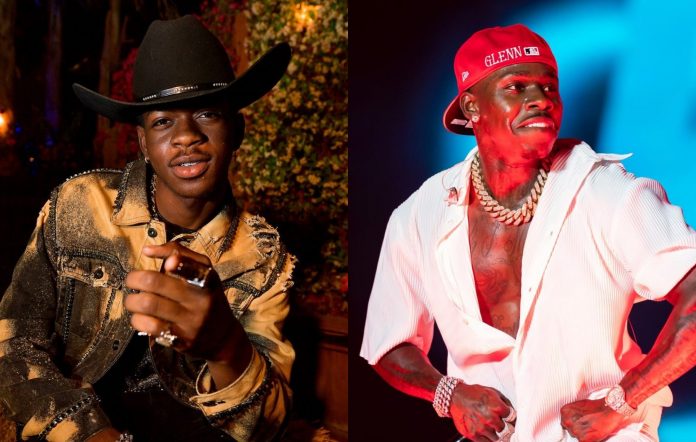 Lil Nas X has said he feels “bad” for DaBaby following the backlash he received for making a string of homophobic comments onstage.

Earlier this year, DaBaby said “fellas, if you ain’t sucking dick in the parking lot, put your cellphone light up,” while performing at Rolling Loud Miami. During the show, he also made comments about HIV that Elton John, Dua Lipa and Madonna all condemned.

Following the incident, DaBaby was dropped from festivals such as Lollapalooza, Austin City Limits and Governors Ball 2021 before issuing an apology to the LGBTQ+ community for his “hurtful and triggering comments”.

In a new interview with GQ though, Lil Nas X believes DaBaby is just part of the “hypermasculine” rap scene and hopes he can grow from the experience.

GQ MAN OF THE YEAR pic.twitter.com/vig5ejxbwD

After agreeing that he has helped to make hip-hop less hypermasculine, Lil Nas X said: “I’m not going to lie, I feel bad for DaBaby. I hope he grows from it. I hope he’s able to. But I don’t know. The whole landscape is very hypermasculine. It’s so great and so amazing that all these female rappers are breaking through. And, in a way, female rappers are the biggest rappers right now.”

He added: “I do feel like this newer generation of rappers who are coming in, and the ones who are here, are going to have to reshape their thoughts. Because change is happening. There’s going to be so many gay rappers. There’s going to be more trans people in the industry and whatnot. Ten years from now, everything that I’m doing won’t even seem like it was shocking.”

He went on to say that he was working towards the “acceptance of gay people” and that acceptance “looks like a little boy asking his parents at eight years old, can he get some nail polish or try something, and it’s not even a question. It looks like two guys kissing during a performance and there not being anything crazy on Twitter about it the next day. Just letting people exist.”

Last month, Lil Nas X responded to a string of abuse from Boosie Badazz. Back in July, Boosie told the 22-year-old that he would “beat his ass” while using homophobic slurs against him.

Then, following a joke Lil Nas X made about the pair collaborating, Boosie launched into a homophobic rant using slurs and suggesting that the star to kill himself in a since-deleted tweet. In response, Lil Nas X’s dad told Boosie to “sit your old man looking ass down”.