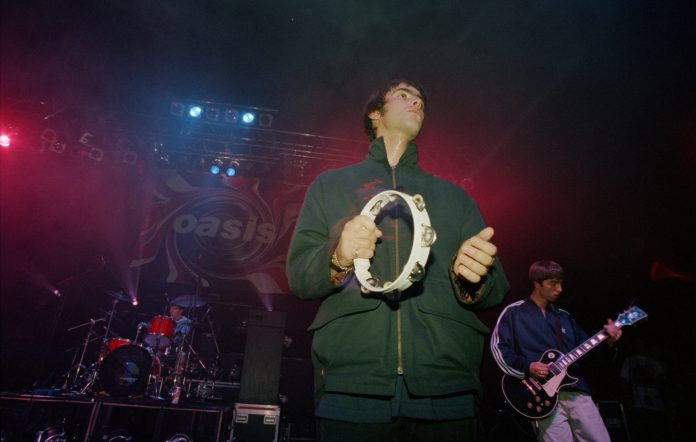 The tambourine Liam Gallagher used to record much of Oasis‘ classic album ‘(What’s The Story) Morning Glory’ has sold for thousands at auction.

The instrument was used on hits such as ‘Wonderwall’ and ‘Champagne Supernova’ when the band recorded the ‘Definitely Maybe’ follow-up at Rockfield Studios in Wales in 1995.

When recording for the album finished, sound engineer Nick Brine took the tambourine for himself.

“It was pretty battered by the end of the session and was going to be thrown away. But I claimed it,” he said.

Battered Liam Gallagher tambourine – that was nearly thrown away – sells for thousands!https://t.co/oZUvt18Zbh@HansonsAuctions pic.twitter.com/H8GIVKmGR1

Brine went on to add that the tambourine in question has since been used by bands including Kasabian, Arctic Monkeys, Supergrass and The Verve.

At auction in Derbyshire, an internet bidder purchased the tambourine with a bid of £3,600, seven times the guide price of between £300-£500.

The winner said they wanted an “opportunity to own a slice of British rock history”.

Josh McCarthy of auctioneers Hansons said: “The price took my breath away, its musical pedigree proved irresistible to bidders.”

As part of the celebrations, Noel Gallagher headed back to the legendary Rockfield Studios for the first time since the album was recorded there in 1995 for a wide-ranging new interview about the undoubted classic, digging deep into the storied creation of one of the most iconic albums ever written.

Elsewhere, Liam Gallagher has confirmed that his upcoming third studio album ‘C’MON YOU KNOW’ is finished and ready to be mixed.

The forthcoming LP – announced last month alongside details of two huge Knebworth shows – follows the former Oasis frontman’s first two solo releases, ‘As You Were’ and ‘Why Me? Why Not.’ It is set to be released on May 27, 2022.