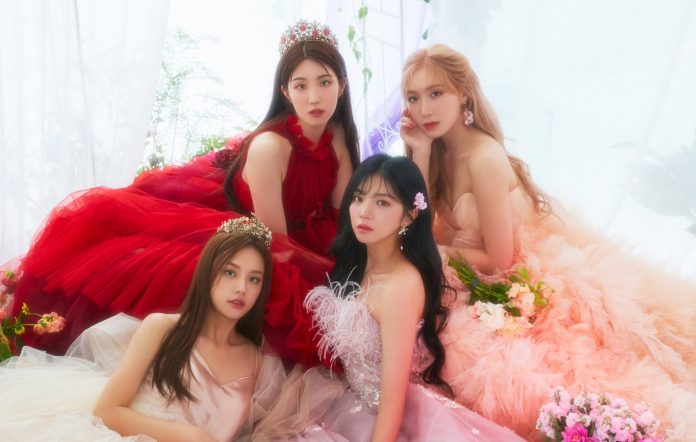 A poster detailing the songs on the upcoming record was shared on LABOUM’s official social media on October 24, listing a total four tracks of ‘Blossom’ including its title track ‘Kiss Kiss’.

‘Kiss Kiss’ was notably written by the group’s vocalist Soyeon, who had also penned lyrics and composed the melodies for two other songs on ‘Blossom’: ‘얼마나 좋을까 (How I Wish)’ and ‘Love On You’. Meanwhile, fellow member Solbin was credited as a lyricist and composer on ‘똑같잖아 (We’re The Same)’.

Also credited on the mini-album’s title track as a writer and composer is South Korean producer Maxx Song, who had previously worked with the group on their 2018 single ‘Between Us’, as well as with several other K-pop acts such as Red Velvet, BoA, Oh My Girl and more.

‘Blossom’ is due out on November 3 at 6pm KST, and will be the group’s first release since signing with Interpark Music Plus last month as the company’s first K-pop group. LABOUM’s comeback was also first announced alongside news of the group’s new management, in which the group shared that they were “picking up the pace” for ‘Blossom’ preparations.

The forthcoming mini-album will also mark the group’s first release as a four-member act comprising of ZN, Haein, Solbin and Soyeon, after former leader Yujeong departed from the group as well as their previous agency, Global H Media.

LABOUM first made their debut in 2014 with single album ‘Petit Macaron’ in August that year. They went on to release two more extended plays, two studio albums and a handful of single albums throughout their now eight-year-career.