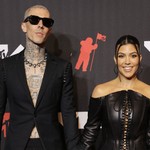 Kourtney Kardashian is still living in her post-engagement bliss. On Thursday (Oct. 28), the 42-year-old took to Instagram to post a series of pictures to her feed, which included her showing off the engagement ring that newly-minted fiancé Travis Barker proposed to her with.

Kardashian showed off her large engagement ring in the photo set, which sees her hand clutching a red rose in full bloom. Elsewhere, Kardashian is seen wearing a red latex dress and posing for the camera; a large heart-shaped bouquet of roses — presumably taken from Barker’s flower-filled beach proposal — decorates a garage; and the mother’s two children are seen watching a California sunset.

The Blink-182 drummer proposed to Kardashian on Oct. 20 with an elaborate rose and candle set up on the beach. Prior to proposing, Barker and Kardashian enjoyed glasses of wine on the beach. As the sun began to set, Barker asked Kardashian if she would marry him, to which she said yes.

In a set of official photos Kourtney posted from the from the romantic proposal, she wrote, “I woke up all night thinking it was a dream.” The drummer replied in the comments section, “Forever with you is a dream come true.” Barker later sealed their love with a kiss six days later — literally, as he got his soon-to-be bride’s lips tattooed to his body.

Barker has been on a career hot-streak lately, working with everyone from Machine Gun Kelly to iann dior to Willow to Trippie Redd as pop-punk enjoys a resurgence in the early 2020s. In the last year and a half, Barker has featured on three top 20 hits on the Hot Alternative Songs chart.

See the new photo of Kourtney’s engagement ring below.