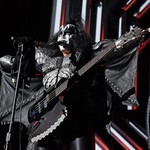 Kiss has canceled its upcoming residency at Zappos Theater.

Just two weeks after the Hall of Famers’ long-time guitar tech died from COVID-19, the band’s months-long run in Las Vegas has been scrapped.

The band was booked to play 12 shows at Zappos Theater at Planet Hollywood starting in the week of New Year’s Eve, and extending into February 2022, for what was said to be Kiss’ final Vegas residency.

Live Nation, which was producing the shows, has confirmed the Vegas run is canceled, though reasons have not been disclosed.

Members of the ‘70s hitmakers — including co-founders Gene Simmons and Paul Stanley — and their crew have tested positive for COVID-19 in recent weeks and months, and the band’s 20-year guitar tech, Fran Stueber, died suddenly Oct. 17 after contracting the novel coronavirus, aged 52.

The glam rockers are currently on their End of the Road Tour, billed as their final trek ever, which kicked off in January 2019 and then had to reschedule dozens of 2020 dates due to the pandemic. Further dates were postponed due to illness within the camp.

The Las Vegas residency was meant to cap-off the band’s U.S. leg, though international dates are booked through July 2022.