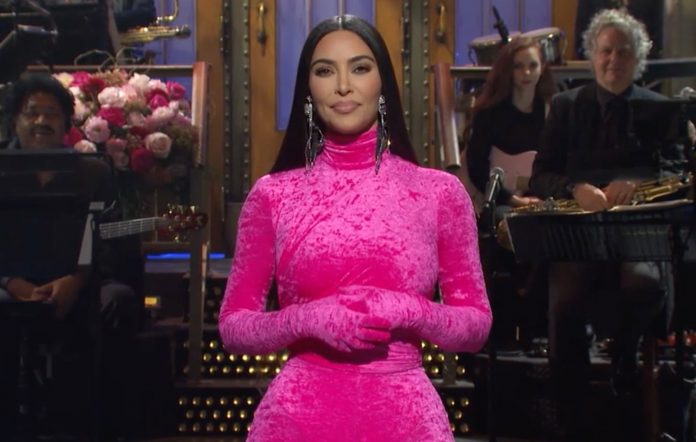 During her monologue, Kardashian joked about divorcing her estranged husband West. “I’ve been very blessed in this life and I’m grateful for everything – all the ups, all the downs,” she began. “I mean, I married the best rapper of all time. Not only that, he’s the richest Black man in America – a talented, legit genius who gave me four incredible kids.

“So when I divorced him, you have to know it came down to one thing – his personality. I know that sounds mean, but people telling me that comedy comes from truth.”

Elsewhere, in a sketch called ‘The People’s Kourt’, she took on the role of her sister Kourtney and poked fun at her relationship with Blink-182 drummer Travis Barker. “You’re so punk,” Barker – played by Mikey Day – told her. “Please drum ‘All The Small Things’ on my ass when we get home,” she replied.

Last week (October 7), it was reported that West was helping Kardashian with her hosting gig. The rapper has appeared as the show’s musical guest seven times since 2005.

According to Page Six, a source told the publication: “Kim is nervous about hosting SNL, it’s a big challenge but she is determined to be a success. Kanye is quietly advising her on her performance, her opening monologue, even her costumes for the show.”

Meanwhile, last night’s episode of SNL saw Halsey team up with ex-Fleetwood Mac guitarist Lindsey Buckingham for a performance of ‘Darling’. It was the pop star’s fourth time performing on the show and her appearance also saw her play ‘I Am Not A Woman, I’m A God’.