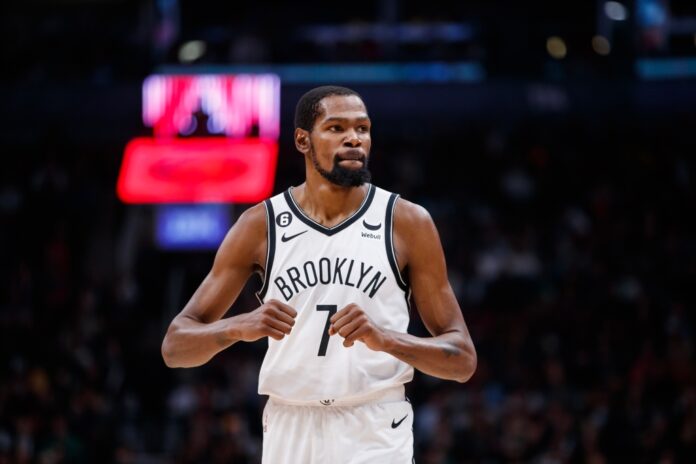 Kevin Durant is one of the best scorers in the history of the entire NBA. At this point, everyone knows of his talents. He is a 7-foot player who can shoot like a point guard. Additionally, he has a knack for getting in the lane and embarrassing the opposing team.

On Wednesday night, Durant didn’t have his best game. He and the Nets were up against the Toronto Raptors, and they ended up winning 112-98. However, Durant only managed to score 12 points. Prior to that, he was scoring over 25 points per game on a consistent basis.

Despite this lackluster scoring performance, KD was able to secure himself a brand-new milestone. According to the tweet below from the Brooklyn Nets, KD has now scored 26,074 points. This means he has officially passed Kevin Garnett for 18th on the all-time list.

Moving forward, Durant is looking to reach 17th, which is a place occupied by John Havlicek. He currently has 26,395, which means it won’t take Durant much longer before he surpasses that mark. Subsequently, Kevin Durant will be looking to chase down a top 10 spot on the scorer’s list. Based on his trajectory, it probably won’t take him that much longer.

Durant has made it clear over the last little while that accolades aren’t exactly on his mind. Essentially, KD just wants to hoop and be competitive. Having gone through an Achilles injury, he has a newfound perspective on the game of basketball, and he wants to enjoy the last years of his career. He won’t be playing forever, and the Nets star is well-aware of that reality.

Kevin Durant #7 of the Brooklyn Nets reacts during the second half of their NBA game against the Toronto Raptors at Scotiabank Arena on November 23, 2022 in Toronto, Canada. (Photo by Cole Burston/Getty Images)

Stay tuned to HNHH for all of the latest news and updates from around the NBA. Also, let us know what you think of this milestone, in the comments down below.