HomeMusicKelly Clarkson Leans Into The Weeknd’s ‘Dear Melancholy’ With ‘Call Out My...
Music 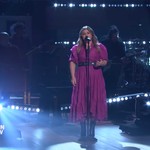 Kelly Clarkson is embracing her sultry side for her newest Kellyoke cover. On the Monday (Oct. 25) episode of The Kelly Clarkson Show, the singer slowed things down for the audience and opened up the show with a stunning rendition of The Weeknd’s 2018 hit, “Call Out My Name.”

Instead of singing in The Weeknd’s signature falsetto tone, Clarkson scaled down the pitch for her vocal delivery and added her trademark vocal runs for stylistic effect. “We found each other/ I helped you out of a broken place/ You gave me comfort/ But falling for you was my mistake,” the singer belted with the assistance of her in-house backing band, before launching into the song’s emotive chorus.

This isn’t the first time that Clarkson covered a song by The Weeknd on The Kelly Clarkson Show — in October 2019, the Hot 100 hitmaker delivered a jazzy cover of his Beauty Behind the Madness No. 1 “Can’t Feel My Face” for her show’s opener.