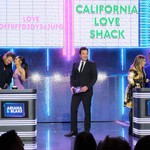 Jimmy Fallon is launching a new late-night show, and all his famous friends are invited.

The Tonight Show Starring Jimmy Fallon host is about to launch That’s My Jam, an hourlong music and comedy variety show on NBC that kicks off next month with a special telecast, Billboard has exclusively learned.

In a sneak peek at what’s to come, Fallon has roped in The Voice coaches Ariana Grande, Blake Shelton, Kelly Clarkson and John Legend, who will all “jam” with Fallon in the special episode, airing Monday, Nov. 29, at 10 p.m. ET.

The new vehicle is inspired by the fan-favorite segments from Fallon’s Tonight Show. It’ll feature two teams of celebrities, battling it out with music, dance and trivia, all for a good cause.

Fallon’s classic games “Wheel of Impossible Karaoke,” “Perfect Mashup,” “Vinyl Countdown” and “Slay It, Don’t Spray It” will be part of the mix, and celebrity guests will compete for a charity of their choice.