Jim Nantz Delivers One Of The Worst Jinxes In NFL History 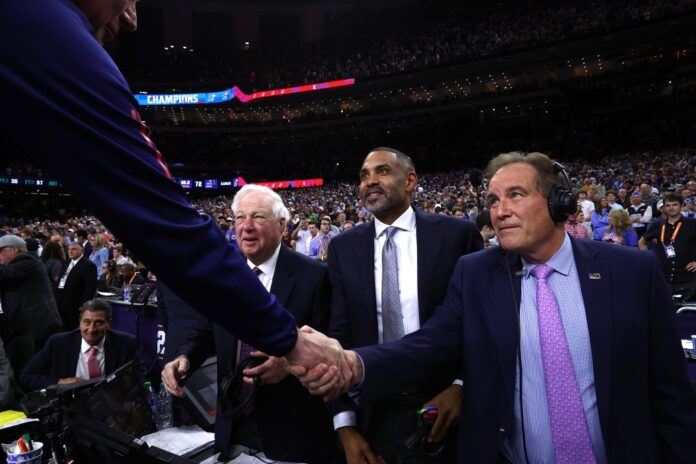 Jim Nantz is one of the most legendary broadcasters of all time. He has called numerous NFL games, as well as golf events, and everything else in between. However, he is not immune to making mistakes or speaking too soon. In fact, he learned that the hard way today while calling a Thanksgiving Day game.

For today’s first NFL game, the Buffalo Bills defeated the Lions 28-25. Interestingly enough, this game could have been tied 28-28. However, this scoreline did not get to take place. This is all because in the third quarter, their kicker Michael Badgley was going for a 29-yard field goal.

In the clip below, you can see that Nantz completely disregards the “announcer’s jinx.” This is a phenomenon that takes place when the announcer says the kicker will have no issue making his FG thanks to his current percentage and range. Consequently, Nantz was proven wrong in the worst way possible. He jumped the gun, got cocky, and Badgley missed from close range.

Holy jinx by Jim Nantz. This might be the ultimate announcers jinx. pic.twitter.com/NjHqszfSHE

Overall, this was easily one of the most egregious announcer jinxes in the history of the NFL. Of course, most people aren’t actually this superstitious, however, you couldn’t help but be mesmerized by the blunder here. If you’re a Lions fan, you have to be upset about it.

Subsequently, Nantz was completely obliterated on Twitter for his comment. At the end of the day, it’s not like he said something that could get him fired. In retrospect, it was hilarious, and it will be something that is talked about for years.

I just witnessed the greatest moment in football announcing history.

Jim Nantz specifically says “don’t talk to me about the announcer’s jinx, but (DET K) Michael Badgley hasn’t missed a kick all year.”

Then he missed it.

Jim Nantz just had the biggest announcer jinx of all time

Jim Nantz with the @OldTakesExposed all-timer in real time.

It’s over. The announcer jinx is real. pic.twitter.com/GriuojSHkY

I think all NFL fans can agree that the great Jim Nantz is not allowed to discuss the kicking position the rest of the season. Cc @CBSSports

Thanksgiving games are a ton of fun, and there are still two more to go. Hopefully, they are half as entertaining as Nantz’s recent mistake.

Stay tuned to HNHH for more news from around the NFL world. Additionally, let us know what you thought of this, in the comments below.