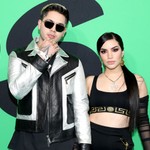 Billboard readers have crowned Juan de Dios “JD” Pantoja and Kimberly Loaiza as their favorite Latin couple of 2021 (so far).

In a fan poll published earlier this month, Billboard highlighted 11 couples in the Latin industry. Pantoja and Loaiza, who are two Mexican influencers-turned-musicians who have collaborated multiple times, took the crown with nearly 63 percent of the votes.

The beloved couple, who’s also married with two children, is followed by Christian Nodal and Belinda with more than 31 percent of the votes. Other top lovebirds included Bad Bunny and longtime novia Gabriela Berlingeri, and Rauw Alejandro and Rosalia, who made their relationship Instagram official on Rosalia’s birthday on Sept. 25.

“I’ve got my fans used to knowing everything about my life,” Pantoja previously told Billboard about having a public relationship with Kim. “I share every achievement, every problem with them on social media. My fans and I are very connected. I chronicle these moments with those who have been there since the beginning since I began dating Kim. It’s nice to be able to share it with them.”

See the complete poll results below: