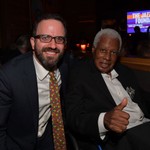 The Jazz Foundation of America (JFA) is continuing to assist musicians who have been financially impacted by the ongoing COVID-19 pandemic. Concord Music Group, Mack Avenue Music Group, Nonesuch Records, Warner Music Group, Universal Music Group’s Verve Label Group and Blue Note Records will release the Relief album, a star-studded benefit project that will be available as a two-LP set, CD and digital album on Nov. 12.

Net proceeds from sales of the release will benefit JFA’s Musicians’ Emergency Fund, which was established in spring 2020.

“The Jazz Foundation of America deeply appreciates the artists, songwriters and label teams who contributed to this project with such compassion and generosity,” JFA executive director Joe Petrucelli said in a statement. “As pandemic restrictions continue to lift, we recognize that musicians will face a particularly lengthy recovery. They were among the first to be hit by the effects of the crisis and will be among the last to achieve a true sense of normalcy or stability. We and our partners are here for the long haul.”

Among the jazz stars included on Relief are Herbie Hancock, Joshua Redman, Christian McBride, IRMA and LEO (Esperanza Spalding & Leo Genovese), Cécile McLorin Salvant, Hiromi, Kenny Garrett and Jon Batiste. Highlights include a poignant live performance of “Gingerbread Boy” by a quintet featuring Hancock, Wallace Roney, Buster Williams, Albert “Tootie” Heath and Jimmy Heath. It was recorded during JFA’s 2014 A Great Night in Harlem benefit show at New York’s historic Apollo Theater and marks the first appearance on record of a performance from one of the JFA’s annual benefits. Roney later died of COVID-19 on March 31, 2020 at the age of 59. Jimmy Heath, who composed the number, died of natural causes on Jan. 19, 2020 at 93.

“I’m honored to be part of this meaningful project that supports the important work of the Jazz Foundation, who has always been there for musicians going through tough times,” said Hancock in a release announcing the project. “They have been an especially critical resource for the community during the pandemic, helping those in need of medical care, putting food on the table and paying their rent.”

Mack Avenue Music Group president Denny Stilwell, who helped assemble the project, added, “The initial impetus was to raise money for the fund. Then Blue Note’s president Don Was said, ‘Why don’t we make a record? Let’s all contribute some tracks.’ There was a nanosecond of silence, and then everybody in our core group, including John Burk at Concord [and] Jamie Krents, at Verve said, ‘Yeah, let’s do it.’”

Speaking specifically on the track performed at the Apollo, Stilwell said, “The thing that makes that track heartbreaking and relevant is the inclusion of Wallace Roney, who was one of the first of our community to pass from COVID. That track, which also features Jimmy Heath, who also left us last year, has some extra weight and meaning for all of us.”

Relief will be available for purchase beginning Friday (Nov. 12).