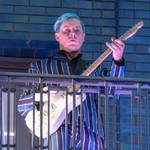 It’s been four years since Jack White released a full-length album, his last being Boarding House Reach in 2018. But on Thursday (Nov. 11), the rocker announced he’s making up for that gap with two upcoming albums both arriving next year on his Third Man Records.

Fear of the Dawn is out April 8, followed by Entering Heaven Alive on July 22.

Already this year, White oversaw the opening of Third Man Records London (TMR’s first store outside the U.S.), launched Jack White Art & Design, a new site showcasing the artist’s creative output over the past 20+ years and released hist latest single “Taking Me Back.”

The music video for the track arrived Thursday alongside the album announcement and can be viewed below.